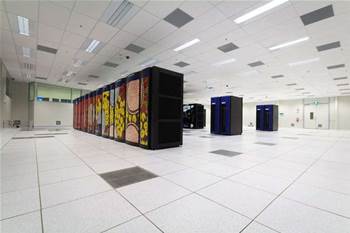 Named 41st in the world.

The performance of the upgraded Magnus system at the Pawsey Supercomputing Centre in Kensington, West Australia has been measured at 1097 tera floating point operations per second (tFLOPS), breaking the petascale barrier.

This figure makes Magnus the most powerful supercomputer in the southern Hemisphere, the Pawsey Supercomputing Centre claimed.

Magnus is a Cray XC40 based system built with the current generation Intel Xeon E5 processors with 2.6GHz clock frequency. It was benchmarked using the Linpack mathematical test coded in FORTRAN.

WIth the 1097 tFLOPS score on the Linpack test, Magnus also made it into the TOP500 list of powerful supercomputing systems worldwide, taking the number 41 spot.

However, the 35,172-core machine pales in comparison to the current TOP500 performance leader, China's Tianhe-2 system.

The Pawsey Supercomputing Centre is a collaborative effort between the CSIRO and West Australian universities.

Magnus has already been put to use with the Petascale Pioneers Program, which awarded close to 90 million processor hours on the supercomputer to 17 projects by national and international reserchers.