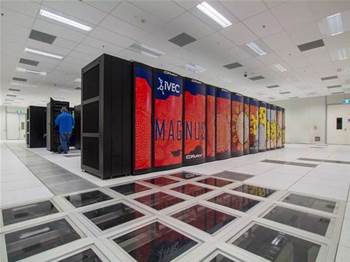 The federal government has committed $70 million to the Pawsey Supercomputing Centre to fund a “next generation” machine.

Prime Minister Malcolm Turnbull said in a statement that the new funding “will help a world-class facility become a world-leading one.”

The funding is to be used to “secure the next generation of supercomputers” at the facility, the government said.

Pawsey said in a statement of its own that "the funds will be used to procure a replacement for its flagship supercomputer, Magnus as well as the real-time supercomputer, Galaxy, as both systems are close to the end of their operational lives."

"Magnus, a Cray XC40, is considered to be one of the most advanced supercomputers in the southern hemisphere," it said.

Pawsey said it would work with Australian researchers to identify their needs "which will inform the configuration of the next systems".

"The procurement process for the capital refresh will commence immediately with the intention of new infrastructure being available from 2019," it said.

NCI landed a similar $70 million investment in December last year to fund the replacement of its Raijin supercomputer. Its new machine is anticipated to come online in 2019.

In mid last year, the chairs of both NCI and Pawsey raised concerns that Australia was continuing to slip down the global supercomputer rankings year-on-year.

Raijin was expected to reach its end-of-life in 2018 while Magnus would reach a similar status in 2020.

The two organisation warned that a funding commitment from the government was needed urgently.

“Of course, it is hard to quantify return on investments in research infrastructure since the resulting business activity is often diffused across the economy and usually emerges far in the future,” they said.

“However, an inspection of the Top 500 list makes it very clear that other governments across the world are investing heavily in these facilities.

“Australia must do no less. Such investments are essential if Australian research, across a host of fields, is to remains internationally competitive, and thus drive innovation and economic development.”

Back in 2016, a government report on national research infrastructure called for an investment into Australia’s high-performance computing capabilities.

“An immediate priority is the need to refresh Australia’s national HPC,” it said.

“This should be coupled with a review of existing governance arrangements to maximise the strategic position and accessibility of national HPC.”

The announcement of Pawsey’s funding today and NCI’s funding in December will raise Australia’s ranking on the list of the world's most powerful machines.