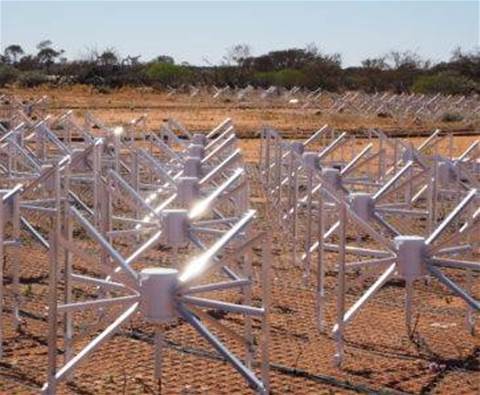 The cluster was procured from HPE earlier this year as part of Pawsey’s $70 million capital refresh project funded by the federal government.

Dubbed Garrawarla, meaning ‘spider’ in the language of the Wajarri people whose land the telescope sits on, the dedicated 78-node cluster processes the petabytes of data streamed from the MWA.

GPUs were selected to provide additional power to the astronomy research that uses compute-intensive artificial intelligence and machine learning workflows for data analytics.

Researchers who had early access to the cluster while it was in pre-production reported software performing two to eight times faster than on its predecessor.

MWA director, Professor Melanie Johnston-Hollitt, said researchers from 20 organisations based in five different countries are benefitting from the Garrawarla installation.

“The MWA collects a petabyte of data a month, and we’ve already archived over 30 petabytes at Pawsey,” Johnston-Hollit said.

“Having a dedicated system means that we can work with Pawsey to fine-tune the system and maximise the efficiency of our workflows.

“Garrawarla and Pawsey’s expertise will accelerate our investigation and processing of this data, helping us to reveal more about the origins and structure of the universe.”

The supercomputing centre described the ingest nodes as “one of the most critical components” of the pipeline between the telescope and the Pawsey data store, which houses ASKAP’s final data products.

The nodes receive the data in real time from the correlators at the Murchison Radio-astronomy Observatory (MRO) and writing the data to disk to be processed on Pawsey’s Galaxy supercomputer.

The new ingest nodes will feature the latest AMD processors, giving researchers twice as much bandwidth to and from the CPU as the current generation of nodes, as well as more memory channels.

Pawsey’s executive director Mark Stickells said the new infrastructure will help the centre’s systems keep up with the deluge of data that are expected to be produced when ASKAP begins full sky surveys in the coming months.

“The ASKAP ingest nodes will increase the ability to transfer data from the MRO into Pawsey’s storage systems, and will help to unlock the value of the astronomical data generated by the telescope,” he said.