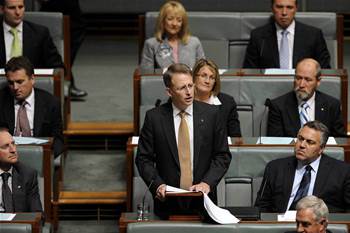 Fletcher replaces Mitch Fifield, who is set to be named as Australia’s next Ambassador to the United Nations.

In addition to covering communications and the arts - as his predecessor did, Fletcher will also assume ministerial responsibility for “cyber safety”.

“As the National Broadband Network nears full roll out and social media becomes an even more prominent front in the fight to keep Australians safe, Paul Fletcher, as Minister for Communications, Cyber Safety and the Arts brings extensive experience and insight to the task,” Prime Minister Scott Morrison said.

Fletcher said in a statement he was “deeply honoured” to be appointed.

“I have worked extensively in the communications sector since the mid-nineties – as a policy adviser, as a senior executive at Optus for eight years, as a consultant serving the sector, and more recently as Parliamentary Secretary to the Minister for Communications from 2013 to 2015,” he said.

“The communications sector serves a vital human need – for people to communicate with each other – and makes a critical economic and social contribution to our nation.

“As Minister I will aim to take forward policy settings which maximise this contribution.

“With many parts of the communications sector facing profound and continuing change, sound policy settings will be more important than ever.”

Fletcher said completing the NBN rollout would be “a key priority” of his tenure.

Fletcher’s appointment was welcomed by industry.

Communications Alliance CEO John Stanton said Fletcher’s “commercial experience in the communications sector and deep knowledge of the industry would be key attributes as the government engages on a wide-ranging array of necessary reforms.”

“I think Paul recognises, better than most, that a balance needs to be struck between the imposition and costs imposed on industry and consumers by additional layers of regulation, compared with the benefits that can be generated,” Stanton said.

“We look forward to working with the new Minister.”

"This key appointment comes at a timely moment for the mobile sector, with the launch of 5G an obvious priority requiring the engagement of the new Minister to ensure a policy and regulatory environment that allows Australia and Australians to leverage the full potential of the latest generation mobile services," Althaus said.

"It is crucial that the government maintains its focus on this opportunity."