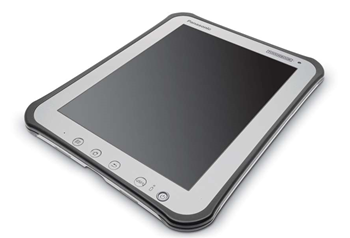 Telcos, energy distributers and other field-intensive operations have been promised a tablet computer that can handle a beating.

Toughbook manufacturer Panasonic has announced plans to release a 'ruggedised' Android-based tablet in the fourth quarter of 2011.

The 10.1 inch touch screen tablet would address a gap in the market and enterprise deficiencies in most other tablets, according to Panasonic.

“The vast majority of tablet devices—regardless of the OS—are engineered for consumers and don’t offer appropriate levels of security and durability or the functionality needed for business use," said Rance Poehler, president, Panasonic Solutions Company.

The tablet would not contain a glossy screen, said Panasonic, but a “high brightness” matte finished XGA screen to improve the display in full daylight.

Panasonic did not reveal pricing details or its technical specifications, but confirmed it will include a stylus to support mobile point-of-sales functions, a satellite-based GPS, and optional embedded 3G/4G connectivity.

The computer-maker also claimed it would offer better security than its rivals by embedding security in the hardware, but provided no further detail.

It remains to be seen whether Panasonic's forthcoming tablet will be as tough as its recent laptop tablet predecessor, the Toughbook CF-C1, which Panasonic rated to be dropped from a height of 76 cm.