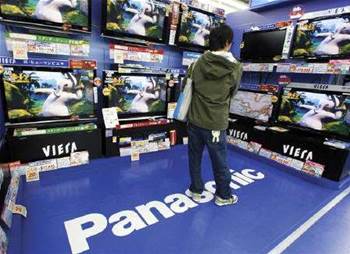 Japanese consumer electronics maker Panasonic said on Thursday it would cut its workforce by around 34,000 by the end of fiscal year 2012.

The company will incur more than 100 billion yen (US$1.22 billion) in expenses this year related to the job cuts and a reorganisation of production facilities, according to a report in the Nikkei newspaper.

Panasonic said it would maintain its target of a 5 percent operating profit margin for fiscal year 2012/13, aiming to post sales of 9.4 trillion yen (US$114 billion), below its previous target of 10 trillion yen.

Panasonic is seeking to shift its focus to environmental and energy-related businesses such as rechargeable batteries in order to duck competition from Samsung Electronics, LG Electronics and others in consumer technology.

"The figure is huge, but so is the company, and for an old-fashioned one like Panasonic, this is a big move," said Toru Hashizume, chief investment officer at Stats Investment Management in Tokyo.