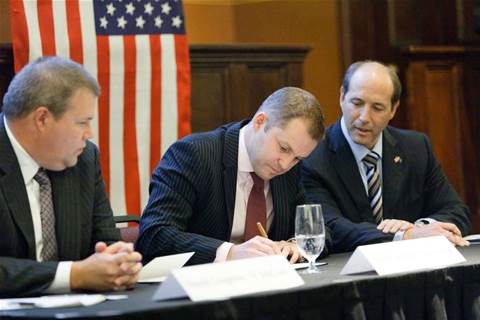 Pacific Fibre, a New Zealand-based bid to build a new submarine link across the Pacific to the US, has signed TE Connectivity to build the cable in a contract worth as much as $US320 million ($A301.8 million).

The vendor, formerly known as Tyco Electronics, would be charged with building the cable under a five-year warranty following its completion in mid-2013.

The twin cable system aimed to connect Sydney, Auckland and Los Angeles over a 12,750-kilometre distance.

Pacific Fibre tendered the work in April. It received four initial responses before whittling down to TE Connectivity.

The TE contract was the first major deal signed for the project and its first milestone since the entrepreneur-led outfit broke with Pacnet as joint venture partner.

Pacific Fibre chief executive office Mark Rushworth said the deal with TE Connectivity had "de-risked" the project and put it on track for build.

"That gives us the green light, the confidence to sign with vendors, and significantly boosts the investor process," he said.

Pacific Fibre expected to complete financing rounds by September, by which time it would begin cable build.

It had already signed two foundation customers - including New Zealand Government-owned education network REANNZ - and was expected to announce a further two customers in coming weeks.

Pacific Fibre recently proposed the use of 128 wavelengths over 40 Gbps technology planned for the cable, doubling the initial capacity forecast of 5.12 Tbps to a total of 10.2 Tbps for the cable.

The cable would be upgradeable to 100 Gbps wavelength technology in future.

Rushworth refused to reveal details around when such capacity would be lit, but the forecast put it ahead of local competitor Southern Cross, which was planning upgrades to its existing cable for 6 Tbps capacity for next year.

A planned cable between Perth and Singapore, built by a Leighton Holdings subsidiary, would deliver significantly more capacity at a total 16 Tbps by 2013.

The Pacific Fibre contract marked the latest of several regional wins for TE Connectivity, which also included a five-year, $400 million deal to supply passive infrastructure components as part of the National Broadband Network.