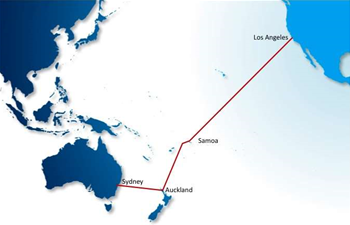 Pacific Fibre, a potential competitor to the Southern Cross Cable, today announced a tender for the build of its proposed cable connecting Australia and New Zealand to the United States, despite losing the funding of proposed joint venture partner PacNet.

The company expects construction vendors to respond by mid-May 2011, with contract negotiations to begin with a single tenderer shortly after.

Pacific Fibre CEO Mark Rushworth said on the company's blog that the memorandum of understanding the company signed with PacNet expired earlier this year, "freeing us to go move ahead more quickly."

Rushworth said that Pacific Fibre had been assuming "a solo-build system for several months now" and that the agreement with Pacnet won't be continued due to key performance indicators not being met.

Rushworth has been asked what these performance indicators were but is yet to respond.

Pacific Fibre will now have to source funding for the cable project without PacNet's contribution.

According to Rushworth, the company is on track to build the ocean cable system by 2013 and has raised enough finance to push foreward with the project. The total cost is said to be $350 million.

Upon completion, the link aims to provide 5.12Tbit/s bandwith over a dual fibre pair.