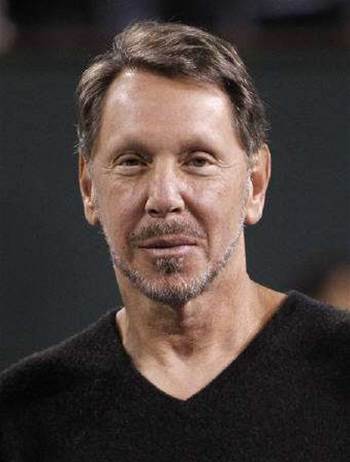 Ellison made the allegation as the the star witness in the US software maker's software-theft lawsuit, which is captivating Silicon Valley.

SAP, Europe's largest software company, has admitted to liability for theft of Oracle software files by a now-defunct subsidiary, TomorrowNow.

The two companies are fighting it out in a federal courtroom in California to determine how much the German company should compensate Oracle.

Three and a half years after Oracle filed its lawsuit, Ellison -- famous for his no-holds-barred attacks on SAP -- is finally getting the chance to argue his case that the German company should cough up billions of dollars.

SAP says it should pay only tens of millions of dollars.

He began his testimony by giving a brief history of Oracle, the world's No. 3 software company and biggest maker of database software, which he co-founded in 1977 and now has more than 100,000 employees.

Ellison said that Oracle would come close to going out of business if his company's software were not protected by copyright laws. Oracle spends several billions of dollars a year on product development.

In the TomorrowNow case, Ellison said that Oracle could have charged SAP US$4 billion to license the programs that were wrongfully downloaded.

Several dozen people had lined up to get inside the downtown Oakland, California, courtroom for the opportunity to hear Ellison, Silicon Valley's richest man.

The judge in the case, Phyllis Hamilton, arranged to have an audio feed of the proceedings piped into a second courtroom set up to accommodate overflow seating.

Oracle President Safra Catz will also take the stand on Monday, according to a company spokeswoman.

Catz, who rarely appears in public, has been in the courtroom observing the trial since it began a week ago.

In a prelude to Monday's drama, Oracle's leading attorney in the case spent over an hour on Friday grilling SAP Chief Financial Officer Werner Brandt about the executive board's decision to buy Texas-based TomorrowNow in 2005.

Brandt testified in German through a translator, but broke into English several times as Oracle attorney David Boies hammered away at him with questions about when he learned TomorrowNow had infringed Oracle's copyrights.

SAP has admitted TomorrowNow wrongly downloaded millions of software files from Oracle's customer service website but says its executives did not know of any wrongdoing when they bought the company in 2005.

SAP shut TomorrowNow, which provided software maintenance services such as upgrades and bug fixes, after Oracle filed its lawsuit.

In 2005, SAP launched a marketing program dubbed "Safe Passage," through which it tried to persuade Oracle customers to switch to SAP software. It offered discounted maintenance on existing Oracle products through TomorrowNow, and then encouraged customers to gradually replace that software with SAP programs.