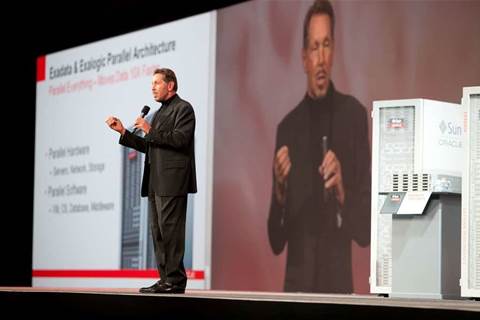 Oracle has outed its long-promised suite of Fusion enterprise applications after more than six years of development.

Up to seven Australian customers had been picked as early adopters for Fusion, including Australian Financial Group (AFG).

But the executive leading the Asia Pacific's applications division has promised a "controlled" and slow release to the region.

The core tenet of the Fusion suite was each module's integration with the others, which Oracle said would allow customers to undergo slow upgrades rather than complete transformations.

Business intelligence dashboards and Oracle's new social network would be integrated across each application module but could be used independently of the Fusion applications themselves.

The modules were designed for deployment on-premise and as software-as-a-service through either the Oracle Public Cloud or regional cloud instances.

"We see a change happening with customers; transformation programs can't happen anymore. It's too much work and it stops a business," Asia Pacific vice-president for applications development Doug Hughes said.

Hughes said he wanted to build customer and partner awareness of Fusion and make sure it was the right time to launch the product in specific geographies before doing so.

"What we've tried to get very good at is to be able to look at the customer, look at their requirements, their requests for what they're after and match the product set that works," he said.

"I'm not going to break them or do any silly early releases."

Hughes said Asia Pacific had lagged behind due to differing legislation, regulation and state of readiness for such products across countries.

AFG chose to upgrade its incentive compensation application - previously a plugin for Siebel CRM - to Fusion in order to avoid extensive coding for each change in payment plans.

The Fusion incentive compensation module is to go live next week with hopes of managing more than 150,000 payment plans, some more than a decade old.

It will remain tied to AFG's Siebel CRM installation which AFG provisioned as its own, multi-tenanted IT-as-a-service offering to 2200 lending brokers across Australia.

IT manager Andrew McGee said the company had opted for the Fusion upgrade to provide more comprehensive training to staff on the product, but ultimately went for an on-premise solution in order to leverage the company's investment in an Exadata deployment.

Presence of IT upgraded its human capital management to Fusion in order to automate some of the talent management required both internally by the company and as part of its talent consultancy.

Duane Thompson, director of  the company's Oracle practice, said Presence of IT opted for the Fusion upgrade to get the "look and feel" of the new product but decided against SaaS for the time being.

"We have a very deeply skilled mobile workforce so it's a challenge for us sometimes having our employees engaged and keeping in contact with us in what are we trying to achieve," he said.

Whilst Oracle was heavily pushing the cloud-enabled aspects of its Fusion suite, it is yet to fully detail its plans for region-specific cloud deployments of the applications.

The Oracle Public Cloud forms the basis of the vendor's cloud plans, providing access to On Demand versions of CRM, HCM, financials and talent management as well as a platform-as-a-service offering for Java, database, data subscriptions and service-oriented architecture components.

However, it will be based out of Oracle's US data centres for the time being, with no confirmation of expansion to other regions.

It remains unclear whether Oracle will continue regional, private deployments of Fusion applications in a similar vein to its Sydney-based CRM deployment last year.

Hughes told iTnews any future Cloud movements around Fusion would likely happen as demand required it in specific regions.

Oracle has begun negotiations with system integrators for third-party deployments of the Fusion applications but has not yet revealed whether these will go ahead.

"I don't want to see a proliferation of things going on out there unless there's value for it," he said.

Why Fusion took so long

OpenWorld 2011 became the first public outing for Fusion applications, despite six years of promises from the database vendors around general availability.

Ellison described the application suite a "huge, huge engineering project" that had to be coded from the ground-up, in many cases rewritten from 25-year-old COBOL code bases.

According to Hughes, key objectives of the Fusion suite - cloud computing, business intelligence and Java interoperability - were core to the project from the beginning, despite the suite beginning development in 2006.

However, other aspects Oracle has been eager to trumpet this week, such as social networking and tablet compatibility, had clearly become last-minute additions decided upon due to increasing trends and competition from rivals SAP and Salesforce.com

"If we tried to do an iterative approach earlier - 'we'll take what we've got and move on' - we couldn't," Hughes said. "What we saw was the rapid change that occurred over such a short period.

"That is something that you can't do in a minor way."

James Hutchinson travelled to OpenWorld 2011 as a guest of Oracle.

Update, October 8: This article previously said UBank had implemented a Fusion CRM On Demand deployment. It has been edited as UBank is an Oracle CRM on demand customer and Fusion middleware customer, not a customer of Fusion apps.