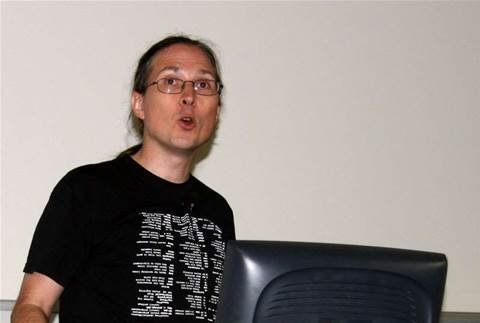 Enterprises or individuals that purchase software which uses open source components are entitled to demand access to the relevant source code despite recent changes to the law, according to Australian technology laywer Brendan Scott.

In mid-2010, Scott completed an analysis of the now-superseded Trade Practices Act for Linux Australia, and concluded that consumers were entitled to demand access to source code used in any hardware or software products under that act.

In a presentation at Linux.conf.au 2011 in Brisbane last week, Scott [pictured] said that while some terminology had been changed when the act was re=framed as the Competition and Consumer Act 2010 on January 1, the key provisions which ensured that access to source code was a right still remained in place.

"I don't think the changes they've made to the act make any difference to [my] analysis," he said.

Open source software licences usually demand that source code be made available to any customer that acquires a product. That can sometimes prove problematic with hardware devices that include embedded code from projects such as Linux, and resellers are often unaware that such software is even in use on such equipment.

However, Scott said that any purchaser -- included businesses and providing the cost of the goods was less than $40,000 -- was entitled to demand access to source code for any open source components.