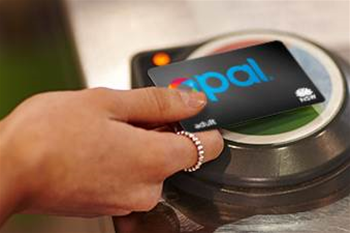 Commuters hoping to ditch their physical Opal smartcard for a virtual equivalent in a digital wallet could be waiting some time yet, despite a state Cabinet minister openly barracking for the move.

As banks, credit cards and retail loyalty schemes all race to get their card products onto the like of Apple Pay, Google Pay and a growing number of rivals, NSW's freshly minted Customer Service Minister Victor Dominello is talking-up a plastic-free push for state services.

“Love using my Opal card - however I would like my Opal card to be on my phone so I can swipe it (like I can payWave with my credit card) - I will add this to my to do list,” Dominello said on LinkedIn just following his re-election in March.

It's a logical next step given that everything from car keys to frequent flyer points have migrated to smartphones over the last few years.

Especially when you consider a mobile handset rather than a wallet is the one single thing you are sure to see in almost every public transit commuter's hand whether they're on rail, bus or tram.

But it could be an extended wait for NSW commuters to go plastic free, with Transport for NSW revealing to iTnews mobile wallet integration is “not a priority”.

In what is yet another blow for the long-term future of the six-year-old transit card, TfNSW reckons it has no immediate plans to futureproof Opal with Apple Pay or Google Pay, despite readers now accepting NFC payments.

Contactless payments using credit cards and smart devices entered the frame in 2017, beginning as a trial on Sydney’s longest ferry route before moving to all ferries and the inner west light rail network in March 2018.

The payment option has since expanded to Sydney’s metropolitan and regional heavy rail, including the recently opened driverless Metro, and will extend to buses over the next couple of months.

But while Opal readers currently accept contactless payments by credit and 'scheme' debit cards (eftpos is still awaiting integration) via mobile wallets like Apple Pay and Google Pay, there is currently no integration of Opal directly within those wallets.

As the primary access method used across the public transport network, the most obvious next step would be to enable commuters to store the Opal card in a digital wallet in the same way they can de-clutter their credit cards and loyalty cards.

One conceivable upside for the government would be it could save costs on printing and distributing physical Opal cards as well as being able to better manage concessions and direct messaging to commuters.

But a TfNSW spokesperson told iTnews that although the agency was always looking for ways to improve ticketing technology, “a digital wallet option for the Opal card is [currently] not the priority”.

“Right now we are focused on completing the rollout of contactless transport payments across the entire Opal network,” the spokesperson said.

While a spokesperson for Dominello's declined to provide any additional detail about the minister's aspirational comments, any proposal to move Opal into digital wallets would act to put NSW in step with other Australian jurisdictions.

Australians have for years marvelled at why, despite having broadly similar tap-and-go functionality, transit card systems remain incompatible when they could be interoperable.

Victoria became the first state to begin offering commuters a digital equivalent of its physical myki smartcard in March after turning to its ticketing system provider, NTT Data, and Google.

Last week the Victorian government said more than 50,000 Android users were “topping up and touching on using mobile myki” since its the cardless scheme was introduced.

It will now “supercharge” development of the system on other platforms such as Apple Pay, but there is currently no timeframe for when this can be expected.

Support for digital wallets also exists on other contactless transit card schemes internationally, such as the Suica card in Japan, which has had Apple Pay integration since October 2016

“Cubic’s mobile platform will enable passengers to add transit cards to Apple Wallet on iPhone, eliminating the need for a physical transit card,” it said at the time.

“Travellers will be able to add transit cards to Apple Wallet, load transit funds, buy fare products and manage their account from the Cubic Traveller app.”

This will start in the US with Chicago’s Ventra card, which is planning to allow commuters to pay for rides on trains and buses using their Apple smartphone.

The amount of time policymakers in Australia are willing to wait before they feel they are being left behind may not be as long as TfNSW would like.