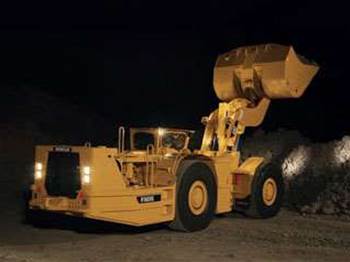 Gold mining operation OceanaGold has begun rolling out a fibre optic communication system in its Frasers underground mine in New Zealand.

The system will be used to support the operation of tele-remote controlled load haul dump heavy vehicles – known as 'boggers' – in the mine.

Frasers runs Cat R2900G underground mining loaders. At the time they were bought, the mine's underground operations superintendent Geoff Hender said the load vehicles had "tele-remote capability, which will be important for future operations".

The mine is now progressing to enable tele-remote operation of the vehicles, which means they will be operated from a control station on the surface using video images transmitted from cameras fitted to the vehicles.

"We have invested in surface Tele-remote loading facility [sic] that will operate the underground Tele-remote boggers through a fibre optic network," OceanaGold said in a recent job advertisement.

A spokeswoman told iTnews that "the installation of the fibre optic communications from underground to surface is underway", without revealing when tele-remote operations from the surface are scheduled to begin.

However, the switch-on of remote control capabilities is likely to be soon, as the company has posted several job advertisements in recent weeks seeking operators for the Frasers mine.

Tele-remote control of boggers is a fairly accepted technology for use in underground mines. It is also employed by the likes of Barrick Gold at its Kanowna mines in Western Australia.

OceanaGold's Frasers mine was commissioned in January 2008 and is one of two mines that collectively form the company's Macraes gold project (the other is an open pit mine).

It is about 100 kilometres north of Dunedin on New Zealand's South Island.