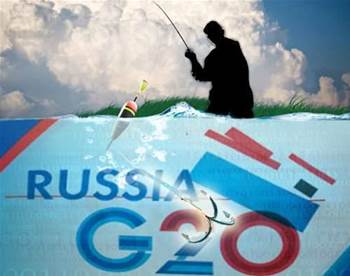 Interest in the G20 Summit in Russia is being manipulated to further the schemes of an accomplished cyber espionage group, researchers warn.

Security firm Rapid7 discovered an intensifying phishing campaign being carried out by APT12, the collective thought to be backed by China's People's Liberation Army, which carried out a months-long breach on The New York Times earlier this year.

Fireeye researcher Claudio Guarnieri, said a "swarm” of malicious emails themed around the 2013 G20 Summit which Prime Mininster Kevin Rudd was thought to be planning to attend, indicated the group was actively targeting organisations for intellectual property and other sensitive data.

Leaders from 19 countries will attend the Summit to discuss the world's most pressing issues and crises.

Guarnieri found that the mounting interest in the summit appears to present itself as the perfect opportunity for hackers aiming to gain a foothold in organisations.

According to the blog post, a Canadian user reported a suspicious file to VirusTotal on May 31, which was meant to look like a PDF detailing agenda notes for the G20 summit.

On Aug. 16, a user in France also reported another spurious zip file, that one designed to appear like informational materials about the forum. And last week, an individual in Hungary made note of a similar executable being sent to their organisation.

In some cases, malicious attachments contained in the phishing emails copied word-for-word the real materials and press releases being distributed to groups about the event.

Based on the activity, Guarnieri concluded that the adversary behind the attacks was APT12, primarily because instructions dispatched to the malware were sent from the same IP address that security firm FireEye also linked to APT12 activity two weeks ago.

No vulnerabilities were leveraged in any of the G20-themed ruses, according to Rapid7's research.

Got a news tip for our journalists? Share it with us anonymously here.
Copyright © SC Magazine, US edition
Tags:
fireeyeg20ny timesphishingsecurity