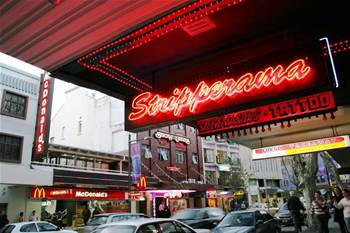 Trial of 35 Kings Cross venues could grow to over 300.

Tender documents suggest a NSW government plan to introduce identification (ID) scanning technology to 35 'high risk' Kings Cross venues could potentially see the technology rolled out to as many as 300 venues, iTnews can reveal.

The O'Farrell Government announced in September 2013 that it planned to trial ID scanners in 35 ‘high-risk’ Kings Cross venues for 12 months in an effort to reduce violence in the night club district, notwithstanding that the NSW Bureau of Crime Statistics found that incidents of violence in Kings Cross have dropped over the last 2-5 years.

The ID scanning system will be crucial to enforcing new 48 hour and 12 month bans that police can impose under new legislation to penalise public drunkenness and violence. Banned offenders will be recorded by the system and prevented from entering any pubs and clubs armed with the scanners.

The trial is due to begin in July, and any extension of will depend upon a decision to continue with the measure beyond 2015.

The NSW Office of Liquor, Gaming and Racing (OLGR) took over the tender process for the scanners after an industry-led consortium operating as the Kings Cross Liquor Accord failed to satisfy probity requirements with its own tender last year.
The OLGR has now called for expressions of interest from suppliers with a capacity to roll-out more than 300 instances of the ID scanning hardware, which will be connected to an integrated database of patrons entering licensed venues.

A spokesman for hospitality minister George Souris told iTnews that the state government has no immediate plans to expand the program beyond the 35 Kings Cross venues, but tender documents explicitly warn potential suppliers they need to have capacity for a possible expansion of the program in the future.

“During the course of the engagement additional venues and/or precincts may be identified into which the successful respondent may be requested to provide ID scanners under this engagement.

“Importantly the system must be scalable to service between 20 to 300+ separate sites,” the OLGR explains.

A spokesman for the office said the solution needed to be scalable to take into account new premises falling into the 'high-risk' category.

"If needed, additional venues can in future be classified as high risk by the Director General of NSW Trade & Investment, with the agreement of the Commissioner of Police, if they are satisfied that there is a significant degree of alcohol-related violence or other anti-social behaviour associated with the premises," he said.

There are roughly 130 licensed premises in the Kings Cross precinct, with a freeze applied to all new licences falling within these boundaries.

Venues will expected to foot the bill for the hardware, and might need up to three devices, according to a pricing schema outlined in the request.

Affected venues will also face tough new privacy provisions under the requirement to collect the names, addresses, birthdates and photograpgs of up to 20,000 people passing through Kings Cross every weekend.

The supplier of the scanner database will be expected to encrypt and password protect all of that data stored to ensure it will only be accessible by NSW police and government officials.

Staff appointed to use the scanner will need to undergo privacy training approved by the Department of Trade and Investment, Regional Infrastructure and Services, and have this recorded as part of their responsible service of alcohol accreditation (at a cost of $30).

Licensees will also face penalties of up to $1,100 if staff without privacy accreditation are found to be operating the scanners.

Personal information will be deleted from the database after a period of 30 days, unless it belongs to an individual subjected to a long term Kings Cross ban.

The NSW government has insisted that the database be hosted in Australia or New Zealand.