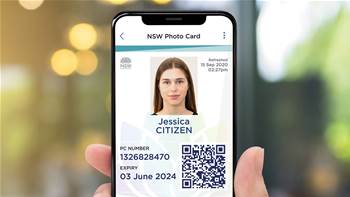 Issues around how authorities will confiscate digital photo cards are holding up the statewide rollout of the plastic card alternative in NSW, with work currently underway to final a solution.

The NSW government began trialling digital photo cards in and around the Sydney suburb of Penrith in February 2021 following the successful rollout of the digital driver’s licence.

The trial later expanded to a further 60 postcodes in August 2021, bring the total number of suburbs across Western Sydney and the Blue Mountains to more than 200.

The postcodes were chosen due to the number of photo card holders in those locations, customer service and digital government minister Victor Dominello said at the time.

But no further postcodes have been added to the trial in the months since, despite the government’s vision to provide a greater number of licences and credentials digitally.

Service NSW CEO Damon Rees told a budget estimates hearing on Tuesday that issues around “confiscation” would need to be addressed before the rollout proceeded.

Photo cards can be seized for a number of reasons under the Photo Card Act 2005, including when information is false or misleading, or if the card has been fraudulently obtained.

“The final issue that we’re working through with Police and Transport is just how to apply the confiscation element that can typically be done easily with a plastic licence,” he said.

“What is the digital equivalent of that experience?

“We just need to resolve that between Transport, Police and Service NSW to give us a pathway to move forward and make that available for everybody.”

Rees was unable to provide a timeline for when this might happen, but said this would become clear “shortly”.

"We’re still finalising the approach with Transport and Police. Once that approach is agreed then we’ll have a clear timeline we can share,” he said.

Rees added that “feedback from the trials has been excellent” to date, without providing any additional information.

Digital photo cards were originally slated to become available to citizens alongside boat and recreational fishing licences in 2017.

Service NSW is planning to bring a greater number of credentials to its app over the coming years, revealing plans for a digital wallet and digital identity hub in November.

The wallet is anticipated to hold both government and private sector credentials such as trade licences in the future.

In December, the government set aside $8.9 million to begin work on the digital wallet, with at least some of this funding to go towards a commercial credential exchange.