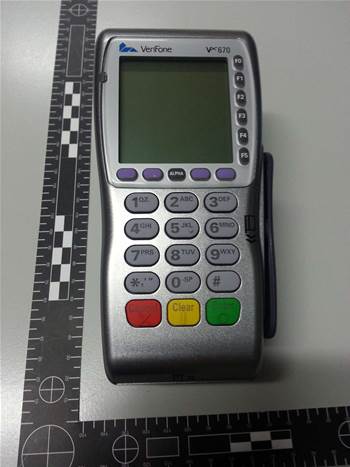 Detectives from the NSW fraud and cybercrime unit arrested four men and searched a motel room in Chullora and a unit in Sydney’s Sussex Street last Tuesday.

They discovered 800 blank credit cards, a card encoder, a fradulent VeriFone terminal, a laptop and cabling, two computers and mobile phones they allege were used to facilitate the downloading of skimmed credit card details.

The four men, from Sydney, Potts Point, Rockdale and Greenacre - one of whom is alleged to be a taxi driver - were charged with dealing in identification information and possessing equipment for the manufacture of identification documents. One man was later released, and a fifth man was arrested on similar charges on Monday.

NSW Police alleged the men stole credit card details from a number of sources, including from installing skimming devices in taxis.

Acting Commander of the Fraud and Cybercrime Squad John Watson urged taxi drivers to report instances where they had been asked to install a skimming devices, and implored people to be alert when making payments with a credit or debit card.

Watson told iTnews the alleged criminals had likely purchased a legitimate VeriFone terminal on the black market from an overseas seller, and modified it to include skimming capability.

“These people were operating at the highest level. They were well organised, and organised in a fashion to get a high volume of credit cards and then convert those credit cards into fraudulent cards and use them very quickly," he said.

“They were able to quickly download the details from the skimmers themselves onto laptops, which had a particular capability to manufacture and clone credit cards; calibrate the cards to ensure the details were downloaded properly; and then use the cards around Sydney.”

Watson was unable to detail how many taxi passengers had been affected in the several months-long skimming operation. He said inquiries were still continuing and urged anyone suspecting questionable activity to report it to police.