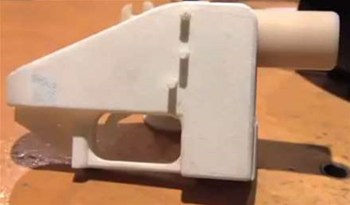 NSW citizens who are found to possess digital files for the printing of 3D guns face up to 14 years' jail under new laws just passed by the state government.

Among other things, the bill amends the Weapons Prohibition Act 1998 to make possessing "digital blueprints for the manufacture of prohibited weapons on 3D printers or electronic milling machines" an offence.

The maximum penalty for the offence in 14 years prison, even if the computer containing the files is located outside of NSW.

The legislation adds to existing laws prohibiting owning or using a 3D-printed gun.

It marks the first time an Australian government has passed legislation to prevent the spread of 3D-printed weapons.

In May this year the Queensland Labor government decided not to proceed with legisation to regulate and penalise the manufacture of 3D-printed guns.

The previous parliament had considered amendments to the state's Weapons Act to impose conditions of practice and penalties for non-compliance and make the creation and possession of printed weapons an offence.

The federal government also started looking into the issue last year, with a senate inquiry tasked with studying how to reduce gun-related violence, especially with the advent of firearms made with 3D printers.

It ultimately recommended that Australian governments look at implementing uniform regulations for the manufacture of 3D-printed weapons across all jurisdictions, and continue to monitor the risks associated with the devices and consider further regulations if required.

In 2013, NSW Police revealed it was using the blueprints for the world's first 3D printable gun, dubbed The Liberator and owned by US firm Defence Distributed, to test a 3D printed gun.

It bought a $1700 desktop 3D printer and $35 of materials to create the 3D gun, which managed to fire but destroyed itself in the process.