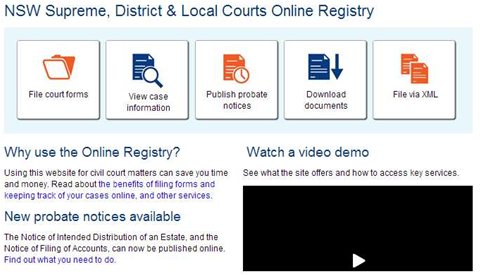 The NSW Government will allow members of the public involved in a civil lawsuit to lodge and manage documents online via an updated registry.

The registry had been trialled with 150 organisations (including law firms and mercantile agents) across the state for the past year, but is now open to members of the wider public.

Civil court forms were previously required to be lodged by paper, in person at a court registry or by post. To check on the progress of a case, the user either had to visit or call a court registry.

The new electronic version allows registered users to lodge and view their case information online. iTnews understands documents previously lodged via paper will be digitised onto the new system, but will not be available to download.

The system is based on a Java platform, including the Spring framework and Hibernate object-relational mapping (ORM) library, running on IBM’s Websphere application server.

The virtual registry integrates with the NSW JusticeLink case management system for state courts to update the relevant case in both systems “within minutes”, the Attorney-General’s department said.

The department said more than 7500 users had registered since the system was opened to trial users last January, with 44,000 civil court forms and probate notices filed online since then  - 11 percent of such forms overall.