Not all welcome at Perth anti-filter rally 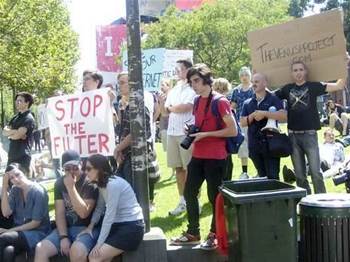 Protesters chant: "No room for racists."

Opponents of the Federal Government's internet filter plan faced unexpected controversy in Perth on Saturday, when an anti-immigration group joined the 'National Day of Action'.

Events were organised in Perth, Melbourne and Brisbane by the Stop the Filter group, which hoped to raise public awareness of ISP-level internet censorship.

An estimated 300 people attended the protest in Forrest Place, Perth, organisers said. The event kicked off at noon and wound down at around 2pm (photo gallery).

Speeches by Curtin University lecturer Mike Kent, Ben Peterson of the Socialist Alliance, Mark Walmsley of the Liberal Democratic Party, and Scott Ludlam of the Greens had been organised.

However, as Ludlam delivered his keynote speech, members of Perth's Nationalist Alternative group unfurled their flag above the stage.

"There was a little bit of controversy," Stop the Filter organiser Trish Zanetti told iTnews.

"We had members of the Nationalist Alternative Group turn up. They put this racist banner up right above the stage," she said.

Zanetti said that Nationalist Alternative members were "made to feel really unwelcome", with some Stop the Filter protesters chanting: "No room for racists."

Other attendees argued that it was hypocritical of the organisers to censor and expel the Nationalist Alternative group.

However, Zanetti said that Nationalist Alternative had been distributing its own, unrelated literature and were attempting to "hijack" Stop the Filter's event.

"Have you ever thought what it must feel like to be a migrant and be confronted with banners like that when you come out ... in support of an event against an internet filter?" she wrote in the Stop the Filter forums.

"When dealing with this sort of thing, you have to make decisions based on the big picture - things aren't always black and white.

"We don't support people who oppress others with their words. That is not censorship -- it is human rights," she said.

Zanetti told iTnews that the rally continued as planned after the Nationalist Alternative group left. Organisers collected "hundreds of signatures" for petitions to the Senate and House of Representatives.

At the State Library in Melbourne, organisers reported having received 300 attendees, aged between 18 and 70 and from various backgrounds (pictured, photo gallery).

Nearly 300 signatures were collected for a petition to the Senate that was organised by Electronic Frontiers Australia (EFA).

Speeches were delivered by representatives of the Greens, EFA, Pirate Party, Exit International and Australian Sex Party, and were well received by attendees, according to Stop the Filter spokesperson Peter C. Hayward.

A few attendees also addressed the crowd publicly, including a concerned parent and an immigrant from Russia who spoke about the importance of freedom of speech.

Attendees also carried posters that read: "Church state: where is the line?", "Senator Conroy doesn't speak for us", and "Get your rosaries off my binaries".

Zanetti said that Stop the Filter planned to host more anti-censorship rallies, and had joined a nationwide "coalition" of anti-filter groups in hopes of coordinating more national events.