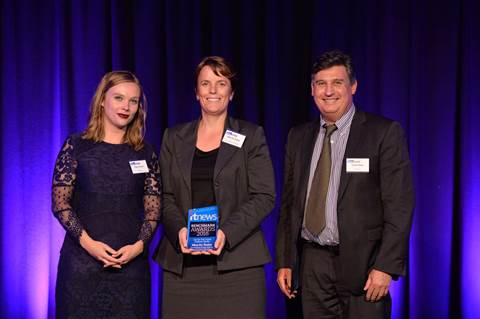 Clever use of geospatial data rewarded.

Du Thaler and her team pieced together the Q-Hubs portal layer-by-layer to deliver QUU a single holistic visualisation of all the water authority’s expansive operations in real-time.

QUU is leveraging the value of already existing data assets and IT infrastructure using an enterprise service bus.

The innovation means head office can track work vehicles as they move between maintenance jobs, dispatch the closest units to emergencies, plus trace the water and sewerage network throughout south east Queensland to better identify and locate faults on the system.

Q-Hubs integrates all this disparate data in real time to extract the greatest possible value, rather than delivering staff a series of static ‘snapshots’ of its operations.

The organisation has reported drops in the cost of planned maintenance and emergency response times thanks to better informed decision-making and more efficient staff deployment.

It has even boosted revenue by giving QUU a bird's-eye view of businesses that are potential trade waste customers in the region.

Judges applauded Du Thaler’s clever re-use of existing geospatial data and IT assets to generate big value to the business. The project received resoundingly positive feedback from her peers in the CIO community.

""My team put in a lot of hard work engaging with business to increase our capabilities for our internal customers... so this is really thanks to the team," Du Thaler said.

Du Thaler has won in a strong field of candidates, including fellow finalists Neil Louis, who headed up the ambitious national Telstra Air wi-fi network, and Melbourne Water’s Chris Truscott, who successfully led his organisation to completion of its $20 million asset management system replacement.