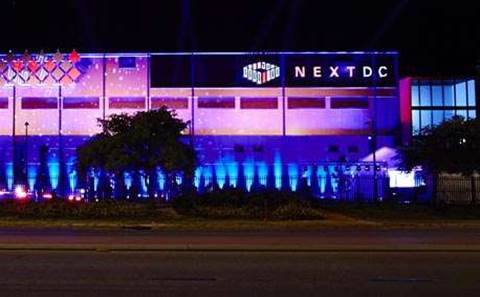 NEXTDC is examining options to use the roof space of neighbouring buildings to run solar arrays in what would be a major expansion of its renewable energy strategy.

Although both facilities enjoy more hours of sunlight than Melbourne, the buildings have considerably less roof space than M1 in Melbourne, which hosts a 401kW array on its roof.

"In Sydney we think we could probably get 250kW peak solar output [using its roof space], yet it's a data centre that is pretty much the same size as Melbourne in terms of customer load," Cooper said.

The company is exploring ways to expand the roof space available to host solar arrays in Sydney and Perth - and the operator's neighbours could hold the key.

"We are looking at the potential to use our neighbours' roof space to expand the footprint of our arrays," NEXTDC CEO Craig Scroggie said.

The mechanism that NEXTDC is considering is a variation of power purchase agreements (PPAs) which have gained acceptance in the United States and elsewhere.

Generally in PPAs, a customer strikes an agreement with a developer to host a solar array and buy its electricity output over a set period of time. In return, the developer builds, operates and maintains the array.

NEXTDC appears to be exploring a variation of that theme where it could volunteer its own roof space, but also augment that with roof space from its neighbours.

"We just need those companies to be able to figure out their financing and get to a point where they can give us a cost per kiloWatt hour and guarantee how it increases [over the life of the PPA]."

A key advantage for NEXTDC is that a PPA would make future solar investment an operating expense rather than a capital expense. Its solar array on M1 cost in excess of $1.2 million and payback could take up to a decade.

"Converting OpEx dollars that you know you're going to spend anyway is a lot easier from a business perspective than convincing the board of directors we should outlay $700-800,000 of capital [on a new array]," Cooper said.

"If I know I will be spending $100,000 a month on electricity bills and I can take $10,000 of that and kick off a solar project, then from a cashflow point of view nothing changes. It's a much easier business case to get together."

Telstra is separately also reviewing its options to enter the PPA space.

Telstra Property's executive director John Romano told iTnews he first looked at PPAs three years ago but decided against them, owing to their relative infancy.

"We're looking at it again," he said.

"We're testing what does it mean for us, what can we get it for, and does it make good business and environmental sense. But we haven't decided anything."

Romano did not specify which type of renewable energy would most suit a financial arrangement like a PPA.