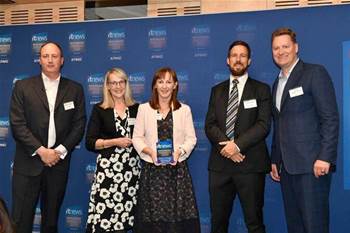 The VR application is used to simulate the delicate procedure of administering anaesthetic-filled needles for second and third-year students.

Using an Oculus headset, the simulation allows students to practice in a controlled, standardised environment before moving onto their peers and eventually real-world patients.

Gone are the days of preparing for administering anaesthetic through only lectures and video demonstrations.

The VR program – believed to be the first of its kind in the field – was developed by the university’s IT services innovation team and the School of Health Science’s Denise Higgins, who lectures in oral health and coordinate the simulation trial.

Accepting the award, School of Health Science's Denise Higgins said she was honoured to receive the award, and thanked her team and the wider university for all the hard work on the project.

“[Without the project] My creativity and my dream would not go out to those who need it, the students who learn the skill to then practice or impart that skill onto patients - and I'm looking at everyone of you," she said.