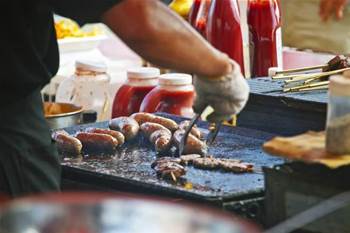 The days of fumbling for loose change at the school fete or footy match sausage sizzle could soon be numbered, after the New Payments Platform (NPP) revealed it’s working quickly with banks, merchants payment services providers to hook-up scan-to-pay QR codes to its real time network.

The real-time payments infrastructure provider on Monday revealed a fresh push to hook into the increasingly popular scan-to-pay standard that has proved wildly successful across Asia as a replacement for cash payments for small ticket transactions that bypass conventional cards.

The scannable 3D bar codes are wildly popular in Asia and many non-Western economies because they leapfrog traditional mag-stripe, NFC and EMV chip cards by facilitating real time digital transactions outside MasterCard, Visa and American Express networks and hook into non-western services like Ali Pay.

The technology is particularly popular with mobile and street vendors because it’s fast and supersedes the need to have a separate proprietary payments terminal, making it the technology of choice for fast service vendors looking to tap into increasingly cashless commerce.

In Australia, QR payments have traditionally been harnessed by merchants who sell to customers that may not typically have a Western payment instrument like a Visa or Mastercard and have established a strong foothold among Daigou traders.

The NPP’s push into the QR space through the release of its own standard means that merchants who might otherwise eschew a traditional EMV mobile payments terminal are now significantly more likely to enable cashless transactions because of the lower infrastructure overheads.

In basic terms, the NPP’s QR code push and standard release means merchants will be able to access the technology from domestic payments providers – like banks and local payment schemes – without having to hook-up to an overseas provider.

Just as importantly for merchants, it means that the money lands in their accounts in real time, so it's as good as cash without the physical security risks attendant with cash.

Adrian Lovney, chief executive of the NPP said the update to the QR payment standard will support a consistent experience for both consumers and merchants “which is crucial for the growing development of the NPP.”

“We want the NPP to support ground-breaking payments experiences that deliver the benefits of real-time payments to both consumers and businesses, and we want these experiences to be enabled by a broad spectrum of innovators such as fintechs, retailers, small and big businesses, as well as banks, building societies and credit unions,” Lovney  said.

“We’ve seen similar implementations of QR codes in an interoperable way in real-time payment systems overseas such as Singapore’s FAST, and that’s something we want to emulate here in Australia,” Lovney said.

It also means that local merchants will able to hit-up their acquiring institution for QR code functionality rather than going to a multitude of overseas providers who can do things differently depending on where they originate from.

That's particularly important for businesses that deal with overseas visitors or customers who don't use traditional Western card schemes.

One of the issues previously facing the widespread adoption of QR codes in Australia has been the challenge of differing standards from providers from various acquirers (banks or payments providers who accept then process payments for merchants).

The entry of the NPP into the QR code payments space with a consistent standard that links both traditional institutions as well as so-called neos and fintechs will create a more consistent and level playing field.

It will also give the Australian Taxation Office, Treasury and banks a far richer insight into smaller ticket transactions as Australia’s financial authorities try to manage the decline of cash and cheques.