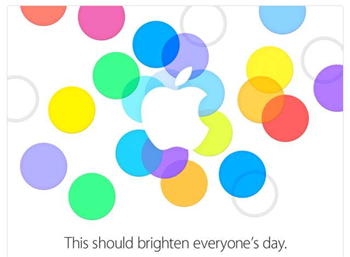 Apple today sent out official invitations to a September 10 event at which it is expected to unveil the latest version of the iPhone.

"This should brighten everyone's day," the invitation read, under a graphic depicting pastel-colored circles surrounding a stark white Apple logo. The new iPhone is expected to be available in colours other than the iPhone 5's black and white.

The company, which is making a focused effort to win over consumers in Asia where rivals Samsung and other Android manufacturers dominate, said in the invitation it will host a breakfast and presentation at its Cupertino, California headquarters.

The company did not provide ny further details.

But supply chain sources in June revealed Apple is expected to launch two new models this year - widely referred to as the iPhone 5S - with new fingerprint technology as well as a cheaper version in plastic casing.

Apple plans to dress up the phone in a range of five or six colors to differentiate it from the more expensive model that has traditionally come only in black and white, according to the sources.

Analysts say the company needs a cheaper phone to drive faster growth in markets like China and India, and to counter Samsung's edge in having a wide range of devices at varying prices.

Growth in Asian markets is seen as key for smartphone makers. China's smartphone market, for example, is set to grow 48 percent this year, outpacing the global increase of 31 percent, according to industry forecasts.