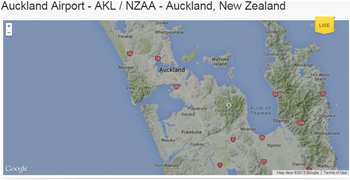 Planes could land, not take off.

As planes were able to land but not take off for two hours, delays built up and created a backlog of flights.

All airports around the country were affected by the radar outage, including the main hub at Auckland. A number of International and domestic flights were delayed and/or cancelled.

National carrier AirNZ said around 160 of the airline's international and domestic flights were impacted by the radar outage.

AirwaysNZ said it immediately suspended all non-airborne flights while it investigated the issue.

"At no point was the safety of any aircraft compromised," a spokesperson said.

"Throughout this outage we had back-up processes in place to deal with this eventuality safely. Around 50 airborne flights were directly affected."