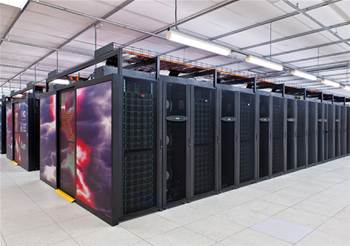 The NCI's Raijin supercomputer, some of which has been reconfigured as the Nirin edge cloud.
NCI

There’s a new edge cloud at the National Computational Infrastructure, Nirin, to make use of some of the capabilities of its now-retired Raijin supercomputer.

Nirin (“edge” in the language of the Wiradjuri people) is designed to support interactive workflows and data analysis, the NCI said.

The zones share access to 6PB of Ceph storage, and Nirin is connected to NCI’s global filesystems with more than 15 Petabytes of research data collections.

NCI explained that Nirin is integrated with the Gadi supercomputer, but is designed to support “those aspects of research computing more suited for a rapid-response environment.”

It is “used extensively for the processing and preparation of data used on Gadi,” and “is also used internally as part of NCI’s data publishing and data management environments.”

Gadi and Nirin are also being offered under a new access scheme NCI says “caters for those users who need smaller compute and data resources in short bursts, rather than those who need millions of compute hours over the course of a whole year.”

The Adapter access scheme is offered in kilo service units – KSU – which are defined according to which resource a researcher is accessing.

Allocations under Adapter are between 100 and 250 KSU, and will be decided on a quarter-by-quarter basis, with the first round of applications closing on May 17.