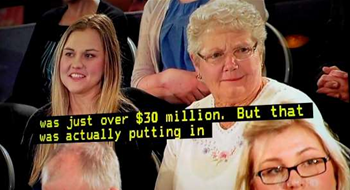 The National Broadband Network last night received votes of confidence from a school, university, pediatrician, patient and rural resident in a televised debate on the SBS Insight program- but the reaction of a resident in a Tasmanian first-release site showed how far the Government has to go to bridge dividing public opinion on the network.

After a relatively dark couple of weeks for the National Broadband Network - turned into a political football by the Opposition and hounded by sections of the press -  the network positively basked in the lights cast by apparent supporters who could see applications that would benefit from a high-speed national internet infrastructure.

The head of the first Tasmanian school to receive an NBN connection, Circular Head Christian School Principal Patrick Bakes, said the school had seen an eightfold improvement in its uplink speeds for videoconferencing.

"We can now do eight [video conferences], so that's significantly faster. We can also download a whole lot more which means that more of our students can be on the internet at any one time."

Bakes hoped the school might eventually be able to link up electronically with other schools to allow it to run subjects across schools that would be unfeasible to offer to low student numbers at each individual location.

"We want to be able to link with other schools in terms of setting up classrooms," he said.

"We might only have, for example, two students who want to do physics. If we can get to other schools using video conferencing, linking, we could run a much bigger class and make it more viable."

The University of New England harboured similar aspirations to use an NBN network connection to run virtual classrooms.

Another oft-cited use case for the NBN - e-health and telemedicine - was also front-and-centre of the debate.

Pediatrician Michael Williams, based at Mackay in North Queensland, was shown using telemedicine on an existing Queensland Health fibre-optic network - a system he said the NBN could make available more widely in the region.

"It may be able to extend things further out and particularly beyond the Queensland Health [fibre] network into private medical centres [and] homes," Dr Williams said.

"[Also] when I'm on call I might be able to get good quality provision looking through to an emergency call from one of our outlying hospitals and assess the patient there."

Prentice said the system "helped out a lot to find out what's wrong with your kids straight away without having to go down to Brisbane [about a 1050 kilometre trip].

"It was actually pretty scary but when Dr Williams was able to organise that interlink it was a lot easier on us and less stress," he said.

An "older" resident of Smithton - one of Tasmania's first-release sites for the NBN - believed the NBN would be "very good" for telemedicine but said she didn't think she "could find very much use" for a fibre connection, and was yet to take advantage of the network.

She was also concerned about the cost of the project.

"I do wonder about the cost of it, because [NBN Co] was in Smithton for five months probably hooking up about 2,500 homes. and those men, they really worked, through gales and sludgy sleet and they worked from sun up to sundown and it still took them nearly five months," she said.

"There was hundreds of them."

The Smithton resident later queried Communications Minister Stephen Conroy on how much the Smithton rollout had cost taxpayers.

Her reaction to Conroy's response was indicative of the type of challenges that lie ahead for the Government to convince sections of Australia that the proposed price tag is not too high, as has been suggested by the Coalition and others.

"The first contract was just over $30 million but that was actually putting in place the backbone, the electronics, the operations centre and a whole host of things that were for the whole of Tasmania," Conroy explained.

"So the backbone, the operations centre, and a whole host of other things that will service all of Tasmania were included in the cost of the first contract."

The TV camera shot from Conroy to Webb after the $30 million figure was dropped, catching Webb exchange glances with the person sitting next to her before turning to face the camera, clearly concerned.

But for other residents of rural Australia, it seemed the NBN could not come soon enough.

Wayne Blacker of Bilyana in far North Queensland was supposed to join the debate by Skype video - only to have the connection drop out just before he was due to go live to air.

"We were going to have someone join from Skype but the line dropped out," host Jenny Brockie said.

"He was going to tell us how much problem he has [getting internet]."

When Blacker joined minutes later, he was connected to a pair-gain system in Townsville, limiting him to 4 Mbps - but said Bilyana was worse.

"Up at Bilyana I literally have to hang a wireless 3G modem over a curtain rod to get any sort of signal so it's not very good up there at all," Blacker said, much to Conroy's amusement.

When asked if he'd sign up to the NBN, he had one word: "Definitely".