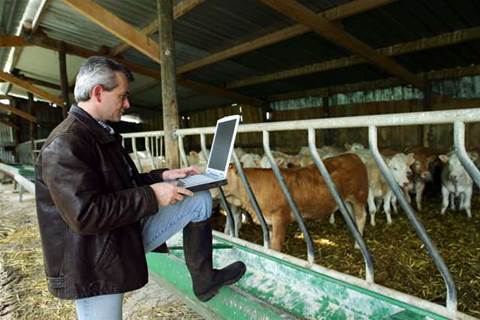 A national broadband network and mobile sensor technologies could transform the Australian agribusiness sector but farmers have lagged behind the rest of the country in adopting telecommunications technology, a new CSIRO report has found.

The agribusiness sector, which includes agriculture, food and fibre processing and agriculture services, contributes about 12 percent to Australia’s GDP and the government’s National Food Plan sees the value of the nation’s agriculture and food related exports increasing by 45 percent by 2025.

In a paper titled Smart Farming: leveraging the impact of broadband and the digital economy, CSIRO researchers argued that the sector stands to gain handsomely from technologies such as cloud computing to share information, special farming apps and sensors that track pasture vegetation, soil moisture, livestock movements and farm equipment.

However, the report noted that “while Australian farmers have generally shown strong interest in new telecommunications services, their adoption has tended to lag other industries.”

Only around 85 percent of Australian farmers use a mobile phone and “while larger Australian agricultural enterprises have a high level of internet adoption (about 90 percent), there is much lower rate of connection for smaller farming enterprises (about 70 percent), a lower use of broadband internet connections in general.”

The report said a lack of universal availability, cost, capability and lack of maturity and reliability of the services being offered were among the factors behind the lag in technology adoption by farmers.

“For example, there is a higher pent up demand for improved mobile and fixed broadband services from farmers compared to other sectors of the Australian economy and on average users in outer regional and remote areas have a 10 percent lower use of the internet compared to the rest of Australia,” the report said.

The report did not put a dollar figure on the impact the National Broadband Network would have on agribusiness output but said that “the rollout of broadband and sensor networks, accompanied by new information services, could not only transform the practice of agricultural industries but also the relationships with upstream service, food processing, logistics and retail industries.”

Colin Griffith, director of the CSIRO’s Australian Centre for Broadband Innovation said the NBN would transform the sector.

“Broadband and related digital service could be a game changer in helping agribusiness boost productivity,” he said.

Professor Peter Batt, head of agribusiness at Curtin University’s School of Management, said many of the technologies identified in the report were already in use and achieving benefits.

“This is an extension of precision farming but it gives the farmer now even more information about crop performance. The greatest applications are those associated with sustainability – using the term broadly to describe the more efficient use of resources,” he said.

“It tells the farmer what fertilisers and chemicals to apply in relation to soils and the environment. In fruit and vegetable production for example, by monitoring things like temperature and humidity, farmers know when it is most appropriate to apply fungicides to prevent infection, rather than spraying to the calendar. And that’s got to be good for consumers and the environment.”

“However, it’s the extension of these systems into the broader more extensive agriculture that’s new,” he said, adding that “not all farmers can access the internet, especially the National Broadband Network.”

Not all farmers have the capacity to use the information such technologies provide or get the advice they need, he said.

“Setting up these systems is not cheap, both in terms of money and more importantly time. For these systems to have the desired impact, the way in which the farmer manages the system will need to change – and that will present a significant barrier,” he said, adding that a lot of farms also faced financial trouble following floods, drought, low commodity prices and the high Australian dollar.

“However, that there remains some key impediments to farmers' adoption of more sophisticated smart technologies. Reliable high-speed broadband services is not available in many inland farming regions and uncertain benefits surround use of some of these technologies relative to their cost. Many farmers have high levels of farm indebtedness so they are not keen to embrace more expenditure on novel technologies whose widespread value remains uncertain,” Prof Kingwell said.