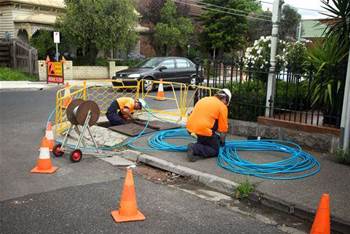 Insists rollout is on track.

NBN has denied the company's rollout of fibre-to-the-node is suffering from delays and rising costs following the leak of an internal document outlining problems with the FTTN build.

The internal progress report, first referenced by the SMH and later published by Delimiter, reveals NBN only completed fibre connections to 29,005 FTTN premises despite an internal target of 94,273 as at February 19.

Similarly, NBN should have had the final design for premises approved for over 1.4 million houses and apartments by February 19, but had only approved 661,665, according to the report.

It attributed the gaps to power and supply issues as well as a number of completions under review.

The report revealed electricity companies were struggling to get power to some FTTN nodes, with the infrastructure builder now tracking pending power approvals daily.

Additionally, the cost per connection for each FTTN premise had reached $1366, the report revealed, against a targeted price of $1114.

In a statement, Communications Minister Mitch Fifield denied the NBN was running behind on its targets, insisitng it remained on track for the current financial year.

"Any suggestion to the contrary is just wrong," he said.

"The company has met its targets for the past six quarters in a row.

NBN said it had proven "repeatedly" that it can "effectively monitor risks and manage those risks".

"We will not be drawn on alleged internal documents, we report quarterly and our results are audited," the company said in a statement.

"This is an incredibly complex project unlike any infrastructure build anywhere in the world."

NBN does not break out out its FTTN connection rate, instead bundles it with fibre-to-the-basement connections. FTTN services first became available last September.

The network had 6636 active users and 123,574 premises ready for service on the FTTN/B network as of December 31. The internal progress report published today indicates the majority of those premises are fibre-to-the-basement.

It is aiming to have 500,000 FTTN/B ready for service premises by the middle of the year.

FTTN will be used to connect around 38 percent of Australian premises under the Turnbull government's multi-technology mix NBN.