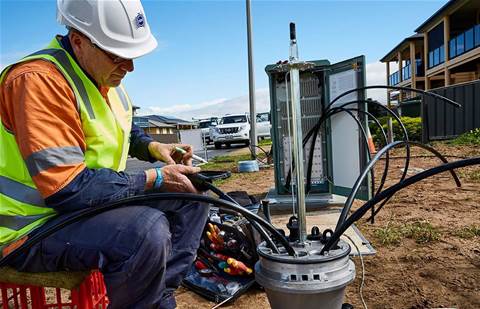 Problems persist in the activation process.

The network builder also revealed that the proportion of installations done right first time - that is, without requiring further visits by technicians - fell to 88 percent - below levels seen a year ago.

An NBN Co spokesperson told iTnews that it "expected" the right first time metric "to fluctuate from time to time."

The spokesperson also said complexity was a contributing factor, citing the amount of work occurring in capital cities, "rolling out our optimised HFC network at scale, as well as [being] the first global broadband provider to roll out FTTC [fibre to the kerb] technology at scale."

"We will not prioritise build and activation progress at the expense of customer experience," the spokesperson said.

The numbers point to activation problems and the likelihood that NBN technician performance numbers revealed at the end of last year could be worse now.

NBN Co said in December that its technicians missed an average of 430 appointments a day in the 12 months to 30 June 2018.

It’s worth noting that, for the last six months of that period, NBN Co reported that it met installation times agreed with retail service providers in between 92 and 95 percent of cases.

Given it is now meeting those agreed timeframes only 84 percent of the time, there are likely to be renewed questions on how well the workforce is coping with the volume of activations on the network.

The problems come at a time when NBN Co’s installation processes are already under regulatory scrutiny.

Earlier this month, retail service providers (RSPs) raised concerns about the rising incidence of services that NBN Co installs and then lists as active without first running checks to make sure they actually work.

Only once it becomes clear that a newly-installed service doesn’t actually work does it get logged for fault restoration under the classification of “new service never worked”.

But RSPs said NBN Co starts charging fees as soon as a service is listed as active, meaning they are paying in situations where they can’t bill customers (since there is no working service).

Vodafone said that NBN Co checks a service is actually live after activation in some cases but not others.

“In the case of FTTC and HFC connection orders, NBN Co does currently check for data flows for a Layer 2 service,” Vodafone said in a regulatory filing.

“NBN Co then issues an order completion advice to the RSP, which is a sensible approach for confirming that the service is active.

“This process should be replicated across all NBN technologies.”

Telstra said that the fault continued to be a problem in the fibre-to-the-node (FTTN) footprint.

“The scenario continues to be a concern for the other technology types, particularly FTTN,” Telstra said.

The ability for NBN Co to categorise installations in this way is problematic for a number of reasons, including performance measurement and charging, but ultimately the impact on the end user who doesn’t have a working service in place despite an apparent successful installation.”

Vocus similarly said it was a “concern”.

“NBN Co should not be able to charge RSPs for non-active services,” Vocus said.

“NBN Co should not be able to close a ticket until it sees usage.”

Optus urged regulators to set a higher standard for fault restoration in cases where a newly installed service didn’t work from the outset.

“We consider that at the very least there should be enhanced service level commitments for resolving new service never worked faults,” Optus said.

“While NBN Co notes that fault resolution has a commitment of one business day, we note this is only for 90 percent of cases.

“We believe all new service never worked faults should have a service level commitment of one business day or NBN Co should have to rebate RSPs.”

The Australian Competition and Consumer Commission (ACCC) voiced its own concerns that 'new service never worked installations "have the potential to distort the measurement of NBN Co’s performance against its service levels".

iTnews has so far been unable to accurately quantify just how many premises are impacted.