NBN Co willing to move on points of interconnect 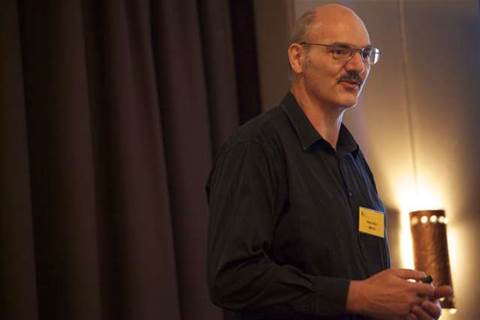 The "inventor" of NBN Co’s controversial point of interconnect plan said the architect of Australia’s next-generation fibre-to-the-home network may change its tune on where and how many access points it offeredfollowing consultation with industry.

Speaking to the IQPC Smart Grid Forum in Sydney today, NBN Co general manager of design and planning Peter Ferris, pictured, said networking operators grousing about the unfairness of the 14 points of interconnect (or PoIs in industry parlance) were doing so because they have "made an awful lot of money over a long period of time" and didn't want to shake up the status quo.

The PoI plan was met favourably at the Australian network operators' conference in September but has since been the subject of criticism from the Opposition and mainstream media.

But Ferris said the new regime would make it easier and more profitable for ISPs to enter the market to provide innovative services.

A PoI is the point at which wholesale service providers and retail service providers or ISPs connect to the NBN and exchange traffic. They were intended to be built in five capital cities and could be expanded as needed. They serve a similar role albeit on a grander scale to a Telstra telephone exchange on the copper access network. NBN Co would use the PoIs to charge the same rate for all traffic no matter where it originated or wound up.

Ferris said he took as a “compliment” the faint praise the PoI proposal received from some quarters.

“Some feedback we got says the solution proposed was an elegant engineering solution, I take that as a compliment because I invented it,” Ferris told energy industry heavyweights gathered to hear how the fibre-network operator could ease their load in rolling out new energy infrastructure that some predict will hit a bill of $130 billion over the next decade.

“But the framework put out there was put out for consultation to look at what the industry feedback was - to get that balanced view."

But that view was being dominated by backhaul operators to the exclusion of ISPs, he said, who were getting in the way of NBN Co's mission of  "fundamentally restructuring the industry".

"Telstra, Optus, Nextgen, the guys with transmission networks in capital areas, they have all said they don’t like it because for them it changes their business model and takes away the opportunity for them to make more money," he said.

"Unfortunately, we haven’t had the 600 [ISPs] all speak up and say - this gives us the ability to deliver ubiquitous services across the country. They haven’t stepped up.

"So in terms of the feedback that’s come through the ACCC and registered on the website, there has only been three of the small ISPs [including] iiNet and Primus, who have actually put in a comment."

Ferris said that if the backhaul networks were working as well as NBN Co critics claimed, "you wouldn’t have an issue where the Government would have to invest in a regional blackspot network and pay Nextgen to put in capability".

But they won't "because you can't make money" on such infrastructure unless the taxpayer is willing to stump up the bill, he said.

"Australia’s a huge country, to join [it] together with fibre infrastructure is a very expensive business."

Ferris said that NBN Co would "execute" Government directives but "did not make policy", which meant it would "absolutely" change its interconnect proposal if the tide of submissions and public opinion was against its technical solution and it received that direction from the Government.

What NBN Co builds depends "on what policy is set by DBCDE [department of broadband] and our shareholders.

"NBN Co does not make policy, we execute policy," he said. "From an NBN Co perspective, we welcome the industry consultation. We will put a joint paper up to the ACCC, to the Minister to get policy. When we have that policy, we’ll execute that policy."

But telecoms analyst Paul Budde has defended the backhaul operators who he said have a right to be fearful that their infrastructure investment will be "stranded".

"It doesn’t make strategic sense to now force that issue with a plan that most players don’t agree with," Budde wrote today in the online journal Business Spectator.

Budde, who was also a keen proponent of smart grids, was "disappointed" that industry forums weren't used to further the conversation but believed the interconnect issue would be resolved to enable the NBN to proceed.

And NBN Co was looking for 30-year leases on "dark-fibre" [excess optical lines in the ground] especially in capital cities, Ferris said, and anyone who "wants to make a little bit of money" should come to talk to the network architect.

These "indefeasible rights of use" were the only way a wholesale provider such as NBN Co could economically shore up coverage in central business districts; it was not interested in paying for data, he said.

He said "no one has the volume of fibre" NBN Co needs, "not even in the CBD".

"They still don't feed every unit, location or apartment in the CBD."

But he said NBN Co was "very, very willing" to "rent anybody’s network that has fibre in the right place".

Flick the page to find out how the power companies and NBN Co are teaming up to upgrade your premises.