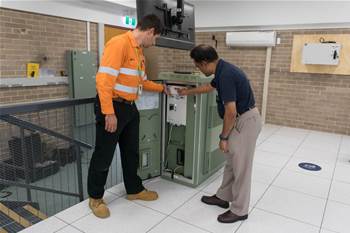 To equip workers to deal with rollout problems.

NBN Co will open a number of simulated training facilities throughout the country to help train 2000 external workers in its fixed-line technologies.

The 'networks simulation labs' are intended to teach external technicians how to "deploy, activate and maintain" the NBN network.

They will offer "real-time experiences in connecting pits and pipes to homes and businesses, installing equipment before the network is activated and helping to resolve connection faults", across the FTTP, FTTN, FTTB, FTTC and HFC technologies.

“There are lots of complexities which come up when working on a live network that can impact the way a technician needs to complete an installation or fix a fault," he said in a statement.

"The benefit of these labs is that we can program problems and challenges for workers to deal with before they get out in the field. They can immediately see how their actions impact a live network and can start building their expertise from day one."

NBN Co today opened the first lab in TAFE NSW's Lidcombe campus. It said it would open more labs across the country at TAFEs and other training providers this year.

NBN Co launched a $40 million program in 2015 intended to improve the skills of its external technicians.

The network builder is currently under close scrutiny by the ACCC over its role in the end-to-end NBN experience.

Retail service providers (RSPs) expressed dissatisfaction with the service standards in their wholesale contract with NBN Co, arguing they have little recourse when NBN Co’s contractors don’t turn up or properly complete work.

However RSPs themselves are also facing higher regulations this year, after the ACMA said RSPs weren't giving customers the right information or acting "quickly and effectively" to resolve migration issues.

Complaints about the NBN - mostly relating to connection delays, fault rectification and missed appointments - lodged with the Telecommunications Industry Ombudsman more than doubled in the past year.