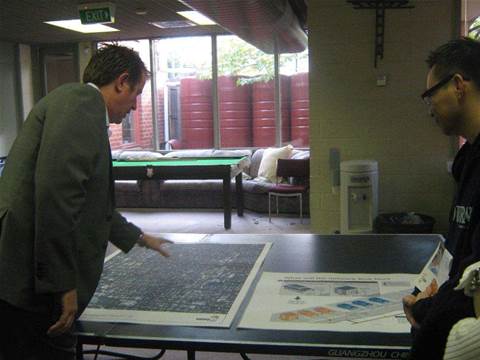 Residents given details about the dig.

NBN Co has told residents it will dig up about forty percent of streets in Brunswick, Melbourne - the main metropolitan area to form part of the "live trial" site for the Federal Government's national broadband network fibre rollout.

NBN Co staff told local residents and small business owners at a community briefing on Saturday morning that construction could begin as early as July and be completed by September. The live trial processes will inform the rollout of the national broadband network.

Around ten NBN Co staff spruiked the social benefits of high-speed broadband and answered questions to residents of the suburb, which is some 15 minutes north of Melbourne CBD.

By the halfway mark of the three hour briefing, about 50 locals had stopped by, from young kids to elderly couples, a turn-out which pleasantly surprised staff.

The trial will connect about 2,600 premises with high-speed broadband. One NBN Co staff member said about 40 per cent of the fibre would be laid underground while the remaining component would be strung overhead using the existing power infrastructure.

Signs at the briefing informed residents that crews would dig deep trenches and lay fibre beneath the streets, instead of threading the fibre through the ducts of Telstra's existing copper pipe network. The construction would take approximately ten days for each street.

By comparison, hanging fibre from the existing power poles would only take three days per street and would be performed by the local power company.

The fibre access node will be built in Coburg, north of Brunswick, and according to a sign at the briefing, this node (similar to a telephone exchange) could potentially service up to 78,500 properties. The node will connect to a number of one metre high, fibre distribution hubs built on each street, which handle about 200 properties.

Properties will be fitted with an optical network terminal (ONT) which delivers services into the home.