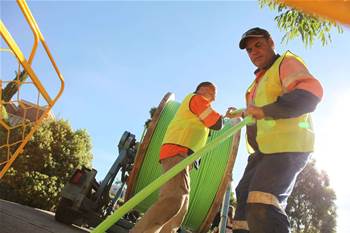 Reveals which areas will get full-strength fibre.

NBN Co has released details on which suburbs will receive fibre-to-the-premise connections under its revised 18-month construction plan, which has scaled back the number of premises forecast to be connected to the NBN by June 2016.

It’s the first detail offered on which regions will receive the national broadband network by June 2016 under the Coalition Government. End-users were left in limbo when NBN Co pulled details of its former three-year rollout plan from its website following last year's federal election.

The company today released the names of the 419 cities, suburbs and towns covering 1.9 million homes and businesses in line for the NBN by June 2016.

The former ALP Government had promised to connect 4.8 million premises by the same date in its last construction plan.

NBN Co declined to comment directly on why it had so dramatically reduced its targets.

A spokesperson said the 1.9 million premises announced today did not factor in HFC or the long-term satellite service (LTSS), which it expects to service around 400,000 users when it launches late next year.

The 1.9 million figure was in addition to works already commenced on 677,535 premises, the spokesperson said, which alongside the expected LTSS figure brought the total by June 2016 closer to 3 million premises.

NBN Co has a target of passing 8 million premises by 2020.

The 1.9 million premises named today were touted by NBN Co as "new builds", but the majority of the listed suburbs had already been slated to receive the NBN by June 2016 under the previous construction plan.

According to the new plan, in 18 months’ time NBN Co will have commenced rollouts in 81 “new” areas in Queensland, 44 areas in Tasmania, 112 NSW regions, 7 areas in the Northern Territory, 42 South Australian regions, 48 West Australian regions and 81 Victorian suburbs and towns.

But of the 81 regions announced today in Queensland, only 28 are new - as are only 38 of the 112 listed NSW locations.

Only one new suburb in South Australia - Lenswood - will receive the NBN under the new plan, as is the case in the ACT, while just two suburbs in WA - South Coogee and Herron - were not named in the last construction plan.

No new Tasmanian or Northern Territory suburbs will receive the NBN by June 2016.

An NBN Co spokesperson said some suburbs classified as “new” were extensions of an existing build.

“For example, in Wollongong we may be already building in the CBD but will continue to build out FSAMs in North and South Wollongong,” he said.

Read on to find out if you'll be one of the first to get fibre...