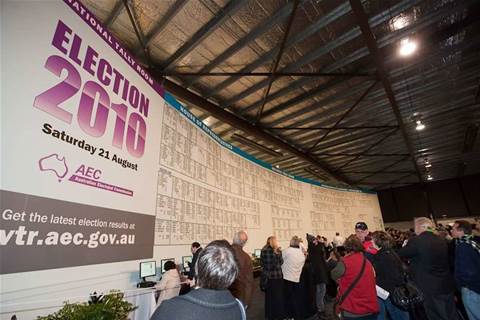 Becomes drain on IT, comms personnel.

The shift to online systems will finally kill off the National Tally Room in time for this year's election, with the pop-up facility seen as too costly and draining on the Australian Electoral Commission's IT resources.

Electoral Commissioner Ed Killesteyn said the room would have cost $1.2 million to set up and operate for a six-hour period, and yet it "now played no role in the actual delivery of election results".

"Essentially [it] provided a visual backdrop for the media to conduct their election broadcasts," Killesteyn said.

"In reality the results are delivered online by the AEC to the media and the wider community through the AEC's website.

"The National Tally Room would cost around $1.2 million to stage again and this is an amount that has become very hard to justify at this or future elections."

IT's first influence on the Tally Room came in 1974, with the introduction of the Polling Results Processing Package (PRPP), which ran on a mainframe computer owned by Customs. It was retired after the 1984 election as the mainframe was decommissioned and the code wasn't portable.

The AEC replaced it with The Election Night Information System (TENIS), a more powerful database platform, which later morphed into the current Election Management System (ELMS).

On election night, results are telephoned into an AEC divisional office, where they are input into ELMS. Users in the National Tally Room see this data in two ways — on screens that take a direct feed from ELMS, and via rows of terminals that display the data using a frontend system called the Virtual Tally Room, according to a 2007 parliamentary committee inquiry.

The Virtual Tally Room application is also public-facing, displaying live election results on the internet. Its existence and growing sophistication is a key reason the National Tally Room is now extinct.

"The introduction of the VTR [Virtual Tally Room] has meant that real time election results information is now available to anyone in the world who has access to the Internet," the commission wrote in a 2007 submission. (pdf)

"The NTR [National Tally Room] is no longer the one place in Australia where political players an gain first hand real-time knowledge of the unfolding election result."

Setting up the National Tally Room is "labour-intensive", according to the AEC.

In 2004, "it took about two weeks to build, three days to dismantle and many months of detailed planning to organise". Technically, it required 84 computer terminals, four printers, seven "separate data feeds", 6km of phone cables, 8.5km of computer cables, two mobile phone repeaters and "in excess of 300 mobile and 150 static telephones".

The Commission hasn't provided such a detailed breakdown for federal elections since then, though it notes that the setup is a drain on limited IT resources, and someone — the taxpayer — ultimately has to pay for that.

"Costs are fully borne by taxpayers, as have been the development costs for the computer systems which underpin the National Tally Room's operations," the commission said in its 2007 submission.

"The construction requires the use of many of the AEC's key communications and IT staff.

The IT and communications staff drafted into the National Tally Room were listed as "indirect" costs, and therefore would be additional to the estimated $1.2 million needed if the facility was used in this year's election.

Despite a lot of this being known since 2007 — and prior — the National Tally Room has been remarkably difficult to kill off before now.

The 2007 inquiry still recommended the room be used for the 2010 federal election. However, that election is now the Tally Room's swan song.