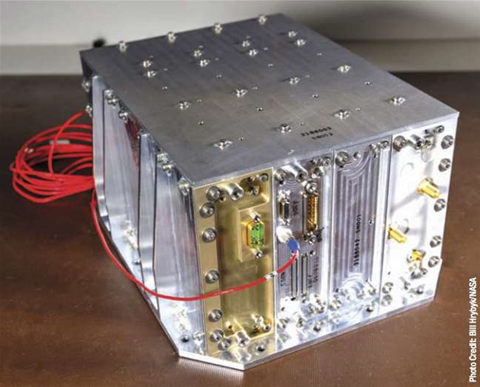 Gigabits per second across the void.

The US NASA will for the first time trial x-ray communications in space, in hopes the experiment will prove it is possible to send data transmissions at gigabit per second speeds across the solar system.

X-ray communications (XCOM) have been tested by NASA since 2007, with a full system-level concept being built at the interferometry testbed at NASA's Goddard Flight Centre, a 600-metre long vacuum system.

NASA believes the technology will rival laser communications and provide the ability to carry large amounts of data while using little power. XCOM can also penetrate radio-frequency shielding on the ground and communicate with hypersonic vehicles and space-craft re-entering the Earth's atmosphere, NASA said.

For the experiment, the space agency has melded the existing SpaceCube reconfigurable flight computing platform with the Navigator global positioning system to build the NavCube device [pdf].

NavCube will not only demonstrate enhanced navigational and processing capabilities aboard the International Space Station (ISS) in 2018, but also use the precise timing data the device provides to test XCOM, the agency said.

For the XCOM trial, NavCube will drive the electronics for a device called the Modulated X-ray Source, which generates rapid-fire X-ray pulses that can be used to encode digital bits for transmitting data.

NASA researchers will use 56 X-ray telescopes from the Neutron-star Interior Composition Explorer (NICER) to detect the X-ray pulses from MXS. NICER is designed to study neutron stars, the densest known objects in universe.

Thanks to the computing power of NavCube and the system's built-in GPS, the device can also be used for X-ray ranging to measure distances between two objects.