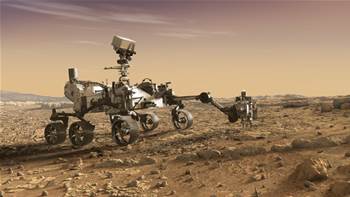 To analyse data in search for signs of life.

Researchers at the Queensland University of Technology have been tasked by NASA to develop software to analyse data collected by the next Mars Perseverance rover mission.

Staff and students at the university will create systems to process geochemical data captured by the rover’s scientific instruments in its search for ancient signs of life on the red planet.

The project is supported by David Flannery, an adjunct professor at QUT’s School of Earth and Atmospheric Sciences and former NASA scientist, and builds upon previous work the university has done with NASA’s Jet Propulsion Laboratory studying Australian rock samples for remnants of ancient microbial life.

The rover collecting the samples is currently en route to Mars travelling at over 101,000 km/h and is expected to land in the Jezero Crater, a formerly flooded site, in mid-February 2021.

“Building on QUT’s expertise in computer-human interaction, field robotics, planetary science and astrobiology, the software will improve the efficiency of rover operations,” Flannery said of the new agreement.

“The perseverance rover is the most complex object ever sent to Mars.

“The mission has several extremely ambitious goals - including searching for past life in Jezero crater, caching samples that will be returned to Earth, and paving the way for human missions.”

The mission is due to last at least 687 days - one year on Mars - with samples set to be sent to Earth for further analysis.