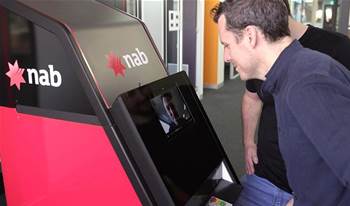 Despite tasting trial success in late 2018.

The bank showed off a proof-of-concept ATM with facial recognition at the Sibos financial conference in Sydney in late October 2018.

It coincided with the bank signing on to use Azure cloud as part of its multi-cloud migration, and served as a very public first demonstration of what NAB and Microsoft could potentially accomplish through their new alliance.

In addition, by sometime the following month - November 2018 - the bank had seen enough to move the project forward.

“[The ATM] was an example of trying something new, testing it with our customers and seeing what they thought,” executive general manager of infrastructure, cloud and workplace Steve Day said in year-old comments that recently surfaced.

“It was an incredible success, and as a result we are now building that into a proper steel ATM.”

The ‘steel’ remark was a reference to the considerably flimsier, less production-ready construction of the original trial “machine”.

Though it looked the part in publicity photos at the time, Day said it was a “polystyrene” construction.

“We put a set of electronics on the front of it, and we were able to use a cloud service to recognise somebody's face and come up with a solution that enables somebody to come up and take money out of an ATM without a card,” he said.

“You just come up, you look at the thing, you put in your PIN, and it gives you money.”

However, not long after Day made his comments, iTnews has learned that the facial recognition ATM work was discontinued.

This may have occurred up to 12 months ago, though was kept quiet. The exact timeframe could not be independently verified.

Working out the 'why'

Exactly what caused NAB to axe the project, given it had been so enthusiastic about the technology and its reception with customers in the preceding months, is unclear, though there are several possible reasons.

First, widespread use of facial recognition to authenticate transactions is unlikely to have been an easy sell to Australia’s financial regulators.

It’s only been recently revealed how much work went into securing the Australian Prudential Regulation Authority’s (APRA’s) blessing for NAB to operate at scale in the cloud.

‘Edge’ use cases such as facial recognition are unlikely to have been an easy sell to authorities, even if the technology improved security in the way NAB considered it would.

“[It’s] a much more secure way of getting your money out of an ATM than using a plastic card,” Day said in his November 2018 comments.

“For a start, there's no card skimming possible. The face that you have is far more complicated and harder to copy than a plastic card is, and it also is a better user experience. You don't have to carry around a wallet to get cash.”

It may also be the technology and user experience wasn’t as production-ready as it was outwardly presented - or, at least, that as work progressed, it became apparent that the technology wouldn’t pass internal gates (for example, risk) and became unviable to continue.

NAB - like other banks and large organisations - has adopted elements of agile methodologies, embedding ‘fail fast’ and other mantras into its workplace culture.

So, while work on facial recognition ATMs has stopped, it may simply be reflective of NAB’s target internal culture - taking something as far as it proves viable, but not investing time in it once it appears problematic.

Day noted this was one of the advantages of working in the cloud.

“The economics [of cloud] come in two ways. Number one, cloud is just cheaper off the bat, but that's probably a 10 to 20 percent saving,” he said.

“The real savings come in agility ... in the fact that we don't spend months or years developing new platforms that sometimes fail and don't work.

“The fact that now we can come up with experiments that last a few days or a few weeks - and if we fail we throw that out and start again - enables us just to move at a completely different pace and deliver so much more to our customers.”

A third possible reason is that ATM hardware itself is evolving and it may therefore not make sense to reinvent the wheel or go to the trouble of retrofitting existing ATMs with a facial recognition capability, if ATM makers themselves are trying to incorporate the technology already into future models.

In Japan, NEC last year showed off a “next-generation” machine with facial recognition built in for Seven Bank’s ubiquitous ATMs in 7-Eleven convenience stores and other locations.

Spain’s Caixa Bank is also deploying ATMs with facial recognition technology at a handful of branches, using technology from Fujitsu and FacePhi.

A fourth possible reason is that NAB and other banks have been slimming their ATM portfolios as consumers go cashless, making the need for more advanced machines increasingly redundant.