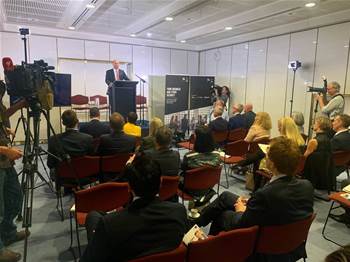 But still no online fraud indemnity for business customers.

The fashion of retail banks giving away free or discounted security software and services is back in vogue.

The National Australia Bank has used what it’s calling “preferential” pricing for Cisco’s cloud-based Umbrella product to spearhead a small business charm offensive aimed at Canberra policymakers as it tries to rehabilitate its public image.

With previous chief executive Andrew Thorburn and chairman Ken Henry already sacrificed at the altar of regulatory contrition, NAB on Monday trotted-out the discount cybersec offer for SMBs at a function at Parliament House in Canberra that attracted both Treasurer Josh Frydenberg and his opposite Jim Chalmers.

The ritual offering to the Hill comes ahead of the arrival of NAB’s new chief executive Ross McEwan later this year, with the business lending heavyweight scouting for feel-good opportunities to display its commitment to social and economic good

But it comes as regulatory pressure builds for banks to help absorb record online credit card fraud rates still passed through to merchants, with the Reserve Bank, ASIC and retail groups all increasingly leaning towards intervention that could cost the Big Four at least $100 million a year.

While both politicians made speeches bemoaning the scourge of cyber fraud, neither went near the elephant in the room, Australia’s $487.5 million a year card-not-present fraud bill that has the Reserve Bank of Australia holding a regulatory stick above the payments industry, especially banks.

Labor reckons there is general progress being made, but the Opposition is still yet to reveal a position as to whether it would allow the passing through of losses to continue.

“Our banks are on the frontline of fighting cybercrime and should be congratulated for the work and leadership they’ve shown in this area,” Shadow Treasurer Jim Chalmers said.

“Through multifactor authentication and one time passwords, banks have delivered a safer internet for all Australians – including for resourced constrained small businesses and customers – and improved our knowledge of cyber security.”

Reassuring for consumers, but don’t bother asking for your money back if your online business bank account is robbed.

Treasurer Frydenberg’s comments and speech were not released with a spokesperson indicating they would not be.

And while it’s great to raise cyber awareness, sometimes it’s best to stick to pre-approved discussion points on what can be a thorny topic.

NAB’s soiree on the Hill follows a week where the Australian Cyber Security Centre faced public criticism over its influence over CyberCon conference in Melbourne where more controversial speakers were dropped from the line-up or discussion on contentious topics like Australia’s encryption-busting laws.

Far better to concentrate on the positive developments, like offers of discounted security services, though there is no number on what the depth of the discount will be for what NAB says is its 400,000 SMB customers.

Staying focused on the positive, there is pricing, and a recommended reseller in the form of OutcomeX for NAB clients to buy their new security wares through.

“The monthly subscription charge is $33 (incl. GST) for 1 to 10 users for your business. $3 will be charged for every additional user after 10,” NAB said in its publicity materials.

“Cisco and OutcomeX are separate legal entities and are not financially backed by NAB. Given their expertise and reputation, we’ve partnered with them to offer a cyber security solution,” the bank said.

But not as nice as having a bank that provides indemnity against credit card fraud for online transactions in the same way as it does for physical transactions.

Why, after a Royal Commission into bad bank behaviour, a $487.5 million a year fraud liability shift to the detriment of merchants has been allowed to continue is a question still too hot to answer.