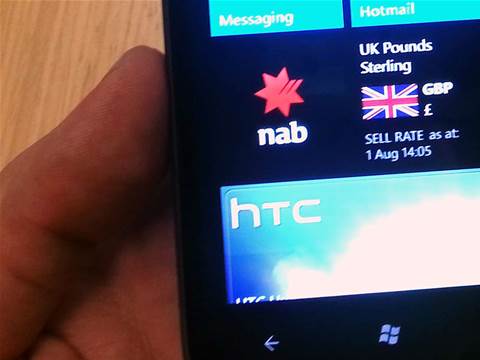 The bank said it had received "over 50 comments" on Twitter and other social media platforms over the last six months, asking for a Windows Phone banking app.

"We've been seeing quite a lot of customers requesting [the] NAB application through the WIndows Phone platform," said Ben Forsyth, head of mobile and emerging technologies at the company.

"Had it not been for this, we probably wouldn't have considered [WIndows Phone] a candidate platform."

NAB developed the app, which is expected to be released for free on August 8, in-house with assistance from Microsoft. It will include all of the features present in the Android and iOS equivalents.

The app also utilises Windows Phone Live Tiles, which gives users the ability to pin elementsof the app to their phone's Start Screen, such as the foreign exchange calculator.

"When we come out with an app we want the same features and the same functionalities so we're not sacrificing," Forsythe said.

"You don't want to upset one camp, because they can be very vocal about that, particularly on social media."

NAB said there had been "significant growth" in Windows Phone interactions with its website, but failed to disclose specific numbers.

"There's no question that it is growing [exponentially]," Forsythe said.

"I think the important thing for us here is that we're listening to our customers requests, rather than relying purely on data decisions."

Forsythe said the NAB banking app had been downloaded close to one million times by Android and iOS customers, with iOS devices contributing 70 percent of all downloads.

The bank recorded more than 600,000 online transactions on June 30 this year — the day before the end of the financial year — with more than a third of those sourced from mobile devices. It did not break down the platforms or exact numbers.