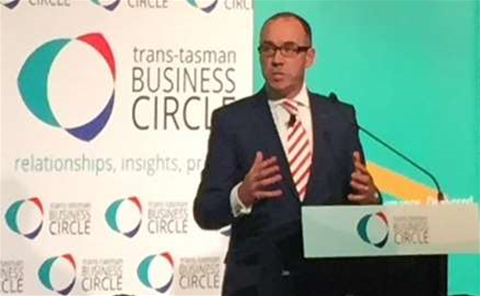 Would rather sit back and watch.

Australia's fourth largest bank NAB is reluctant to jump on board with emerging and digital payment protocols like Bitcoin, instead opting for a wait-and-see approach based on the response of other leading banks around the globe.

Speaking to a Trans-Tasman Business Circle lunch today, NAB CEO Andrew Thorburn said he operates in a constant state of flux and paranoia as to where he stands on digital disruption and the likes of Bitcoin.

"It will be interesting to see how the likes of peer-to-peer lending plays out. I think that should be something we are concerned about, but we haven't hit a down cycle - and that will be tested in that down cycle."

He said NAB preferred to see how central banks around the world reacted to Bitcoin before commiting to any big leaps into that market.

"I think [Bitcoin] will be really challenging for them. [But that is] an area we scan and monitor and think about."

NAB rivals Westpac and Commonwealth Bank have taken slow but progressive steps when it comes to testing use cases for emerging technologies like Bitcoin and other crypto-currencies.

CBA recently revealed it was using the Ripple payment protocol to transact between its subsidiaries, while Westpac's venture capital fund Reinventure Group last month invested in one of the world's leading Bitcoin companies, Coinbase.

Held back by legacy tech

More of a pressing concern for Thorburn, however, is making sure NAB's own infrastructure is able to handle whatever new technologies and products the bank wants to throw at it.

The bank has been struggling through a lengthy and ambitious NextGen core systems overhaul project, which aims to replace all of NAB's legacy technology from data centres and networks to core banking.

But rumours of growing problems with the transformation persist, specifically concerning scope creep and goal changes, not helped by an overly ambitious timeframe.

NAB's technology team was last year told to prioritise building the NextGen core platform over migrating off legacy systems. The bank had originally promised to provide an update on the transformation project at its most recent results, but detail on NextGen's status was nowhere to be found.

Thorburn today admitted the bank's legacy platforms were proving to be an obstacle to its ability to innovate and adapt to new technologies.

"Anything that has to be wired into [or] affects legacy technology is a real challenge," he said.

"So we have to do some work outside of that more quickly."

He said the bank was increasingly growing its own digital and technology capability in house toe be able to create products that would be "as credible as any other external party".

"I do think we've got the capability increasingly in our own company," he said.

"Our investment in mobile and payment technology is crucial. We're scaling that up significantly, hiring very different peope to help us think about that.

"Our tech people and digital teams are getting larger and larger, and our research and development facility is getting scaled up much more significantly.

"And the ideas that come out of our hackathons [give me] real confidence that they are going to be as competitive as anywhere else."

"Trains, trams and buses are our biggest branch: there's no doubt the change is here, and we need to invest in mobile and payments technology to stay ahead."