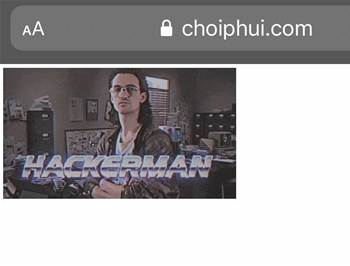 Security researchers are watching the infrastructure of malware delivery botnet Emotet being compromised by an unknown actor, and disrupting the criminals' activities in the process.

The images include one of Hackerman, who starred in the internet cult classic Kung Fury.

This involves the Emotet criminals using hacked Wordpress sites for storing the malware files users are tricked into executing.

To manage the distribution of malware, the Emotet gang leave an open source webshell application on the sites for access and control.

"Their passwords and techniques for this are known. The net impact is anybody can replace their payloads," Beaumont said.

Around a quarter of all Emotet distributed malware payloads have been replaced in an automated fashion, Beaumont and other researchers estimate.

Instead of executing the malware when users click on links in phishing emails, an animated GIF displays in the user's browser.

Those giphy's must have spooked Ivan. He orphaned an entire week's worth of tier 1 infrastructure on a Thursday morning.

Currently, there's no indication as to who is disrupting the Emotet operation.

Beaumont speculated that it might be the Emotet criminals themselves, or other threat actors trying to sabotage the botnet.

Security researchers could also be behind disrupting Emotet, Beaumont speculated.

While acknowledging that Emotet is being directly impacted by the attack, Beaumont cautioned that anybody could replace the payloads for other malware that's less detectable.

Emotet had been quiet for several months until recently when Microsoft Security Intelligence noted the botnet had resurfaced with a massive email campaign.

The botnet is believed to have distributed the malware used to attack 19 organisations in Australia last year.