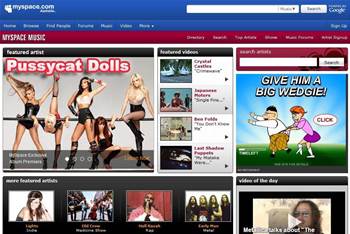 Users can determine whether people under 18 years old can view their profiles.

Social networking pioneer MySpace has updated its privacy settings for its users.

In an email to its estimated 122 million members, it claimed that it had "made some changes to our privacy settings to make them simpler than ever". The changes are now set out simply so users can determine who can view a user's profile content – choosing between ‘anyone', ‘only my friends and anyone 18 and over' and ‘only my friends'.

Profiles are automatically set to be viewed by ‘anyone' but MySpace has said that "if any of your previous settings were set to only my friends, your entire profile is now set to only my friends". Other settings allow the user to determine whether other users can see when they are online, their birthday, and whether to allow users under 18 years old to be able to contact them.

MySpace said: “At MySpace, we understand the importance of privacy and allowing you to control your information. Don't worry we aren't forcing you to share any information that you didn't share before. We just want you to be 'in the know' about what the privacy settings are, how to use them and how they affect the types of information you share.”

It also clarified a user's basic profile information as consisting of their profile picture, numerical friend ID, vanity URL (if they choose one), stated location, gender and age, display name and their real name (if they choose to display it).

It said: “This information is public, which means it is available to everyone and will be displayed in search results both on MySpace and on external search engines.”

Graham Cluley, senior technology consultant at Sophos, told SC Magazine that while he has never been a MySpace user and has only looked at it to check out the occasional malicious page, he welcomed the move not to ‘water down' the privacy from what it was before.

He said: “As with any of these sites, folks need to be careful about what they share online and it sounds like MySpace gives you the ability to prevent private content from being shared on a case-by-case basis.

“Finally, users who are nervous of apps installed by their MySpace friends being able to access their profile content may want to consider blocking all apps that they haven't added themselves.”

He encouraged people who have long dormant MySpace accounts to revisit it and check that their privacy settings are in order, and if they feel it is safer to remove any information which they no longer want to appear there.

Got a news tip for our journalists? Share it with us anonymously here.
Copyright © SC Magazine, US edition
Tags:
18candetermineforintroducesmyspaceoldpeopleprivacyprofilessecuritysettingssimplifiedtounderusersviewwhetheryears