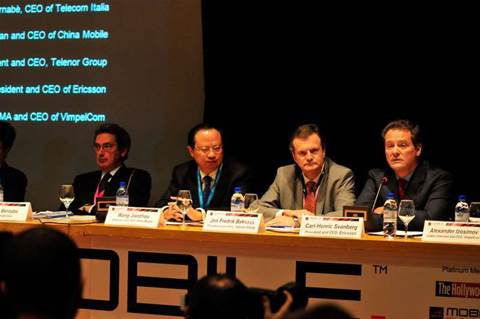 More spectrum, it was argued, would allow the mobile industry to play its part in generating growth that might pull the world economy out of the doldrums.

Rob Conway, CEO of industry group GSMA predicted that infrastructure spending and not housing will pull the world economy out of recession.

Carl-Henric Svanberg, CEO of equipment manufacturer Ericsson said every dollar spent on broadband has a tenfold payback for society.

"Mobile broadband should be seen as infrastructure - like highways and utilities," he said.

"Governments are turning to the mobile industry for economic growth," he told the conference. "We are among the few sectors not asking for a bailout."

But the future of mobile telecommunications, he said, relies on migration to Long Term Evolution (4G) - a technology that requires more mobile spectrum.

"We will be out of future capacity without new spectrum," he said.

Conway urged Governments to give mobile networks are bigger share of the 'digital dividend' - that wireless spectrum available for reallocation once broadcasters move from analogue to digital.

"We are only asking 25 per cent of the 400MHz that will become available," he said. "Using that spectrum for wireless is a bigger boost for the world economy than a few new TV channels."

Carriers also warned governments not to be too greedy when it comes to allocating new spectrum.
Telenor president and CEO Job Fredrik Baksaas said Europe's 3G auctions "took the heat out of the [mobile industry's] investment capacity."

There is a danger that the spectrum required for LTE might be allocated in the same way, he said.

"Additional spectrum is not a luxury but an absolute necessity," said GSMA chairman Alexander Izosimov.

"Many people in Government may be tempted to repeat what happened with 3G auctions. They need to pay for all these stimulus packages and they know where to get it."

But such an approach, he said, "will suck up all the resources for investment. That will have reparations across the whole value chain."

"We are not asking for subsidisation," he said. "We need lighter regulation."

"The demand is there [for mobile services], and our willingness to invest is there. We don't need help from the Government, but freedom to act."