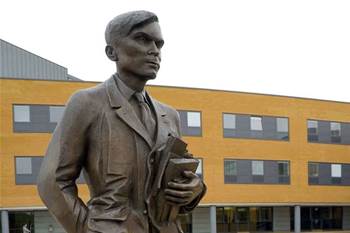 Statue of Alan Turing at the University of Surrey. (Credit: Guy Erwood / Shutterstock.com)

Cryptographic war hero celebrated as the father of modern computing.

Some 100 computer scientists and enthusiasts gathered at Monash University on Friday to celebrate the centenary of British mathematician Alan Turing’s birth.

Turing – widely heralded as a World War II hero and the father of modern computing and artificial intelligence – was born in June 1912 and died 41 years later, by his own hand.

Enigma was used to encrypt communications between German military ships and other troops. Instead of straight key-based substitution techniques, Enigma used a series of adjustable rotors and an extensive network of patch panels to change the key while the message was encrypted.

This approach made Enigma-encoded messages incredibly difficult to reverse engineer, with 1020 possible combinations of encryption keys.

Turing eventually used statistical pattern analysis to extract correlations between plaintext and Enigma-encoded cipher text; ultimately, he was able to exclude the effect of the patch panels and whittle down the number of possible Enigma keys to just 1 million (106).

"This meant he could reduce this search from being a search of all the combinations to just a search of the [three or four] rotors," Steinfeld explained.

"The entanglement between the rotor and plugboard had prevented us from being able to do this but Turing's contribution was to find an ingenious way to make a shortcut work; he reduced the search from hundreds of years to milliseconds."

After the war, Turing's work built on his efforts and paved the way for modern computers.

Working as a reader at the University of Manchester, Turing helped write software on the Manchester Mark 1, one of the earliest stored-program computers.

Underlying Turing's work was his conceptualisation of 'Turing machines', basic computer programs whose output can be fed into additional programs to develop complex programs.

Turing gave great thought to the idea of artificial intelligence: entranced with the idea of writing a computer chess program, he proceduralised the game's rules and, lacking a real computer powerful enough, played the role of the computer in his head to test the rules.

"Turing created a system where chess players now play much more like computers, rather than the other way around. The circularity of it is that computers are now training us [to play chess] but we're still telling computers where to look."

Turing's work with chess programming pave the way for his seminal 1950 treatise on artificial intelligence, Computing Machinery and Intelligence, in which he posited the now-famous question of whether computers could ever be 'smart' enough to convince a human that they were in fact human.

The so-called 'Turing test' has become a commonly used metric for the development of artificial intelligence, which Turing predicted would become sophisticated enough by 2000 that computers would trick humans 30 percent of the time.

The Turing test underlies modern CAPTCHA codes – distorted textual images universally used by Web sites to ensure visitors are human – and is universally quoted in discussions about the artificial intelligence.

"Turing was arguing with everyone he could find about the possibility of an intelligent machine, and those arguments inevitably failed to resolve themselves because nobody could come up with a clear and coherent definition of what intelligence is.

"You don't have logical sufficiency if you can pass the Turing test with random behaviour."

At both theoretical and practical levels, Turing's work not only fuelled the creation of the computer age but spilled over into other disciplines, including biology and mathematical problem analysis.

That Turing's legacy would spark centenary events in 2012, speaks volumes for his legacy – which ignominiously ended, Graham Farr noted, with his suicide after a string events that started when he was blackmailed by a former gay lover.

That homosexuality was a crime at the time meant Turing was stripped of his security clearance, and spent his last few years as a consultant to the British Government.

In 2009, UK prime minister Gordon Brown apologised for the way Turing was treated and heralded his accomplishments – but it was "a terrible way for a man who had done what he had done, to be treated," associate professor Graham Farr argued.

"What Turing really deserved, is the thing here that we are part of now."