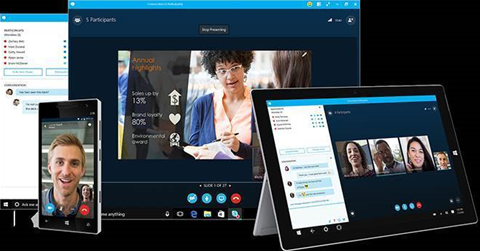 Microsoft used its annual Ignite conference to unleash two new Microsoft 365 offerings, along with plans to replace Skype for Business and to create a full quantum computing stack.

The two new flavours of Office 365 target the education sector as well as "firstline" staff.

Microsoft 365 Education combines the Office 365 productivity suite with Windows 10, and the Enterprise Mobility + Security software, along with Minecraft Education Edition.

It comes as two plans - Microsoft 365 A3 and A5 - along with the non-profits edition at an unspecified discount. The plans will be available from October 1, and pricing is yet to be disclosed.

Meanwhile,the company hopes to sell its Microsoft 365 F1 Enterprise plan to business with frontline staff manning counters and shop floors, working phones or in clinics to help them collaborate and to provide training at work.

Microsoft calls such employees "firstline workers", and the O365 F1 package includes a range of tools from Dynamics 365, Microsoft IoT and AI, and HoloLens, to Office Online, Outlook business email and calendaring, SharePoint Yammer and Groups, and Teams chat-based workspace.

Teams to replace Skype for Business

At Ignite, Microsoft also gave notice of its intention to shift cloud customers from the Skype for Business communications client to its Teams for collaboration offering.

To entice customers to make the transition from Skype for Business, Teams users will get the ability to make and receive calls to landlines and mobile phones, Microsoft said.

Other features such as hold and transfers for calls, and voicemail will also be be added in the coming months.

Teams will also lean on artificial intelligence, machine learning and speech recognition for features such as finding the relevant documents and files ahead of meetings, and setting reminders for follow-ups on action items.

Microsoft announced a preview of audio conferencing for Teams, which is now also interoperable with Skype for Business, sharing features such as universal presence, and messaging and calls between the two.

Teams will use a revamped Skype infrastructure for cloud-based enterprise-grade voice and video communications, Microsoft said.

A further roadmap detailing Microsoft's plan for Teams will be released next month, and the company said it will continue to support Skype for Business in Office 365, and Skype for Business Server, for customers who prefer to keep their communications systems in house.

Photon-based quantum computing is still some way off from hitting the IT mainstream, but Microsoft is working on making it a reality with a new toolkit.

The company said it is working on building a full quantum computing stack, including hardware and software.

Its latest effort in the area includes a new, yet to be named programming language that works with its Visual Studio integrated development environment.

The programming language can be used to build applications on quantum computing simulators, and the code will run on hardware when it becomes available, Microsoft said.

The quantum devices have to operate at temperatures very close to absolute zero, or 30 milli-Kelvin, to protect them from outside interference, Microsoft said.

Microsoft is inviting developers to join a preview of its quantum computing offering.