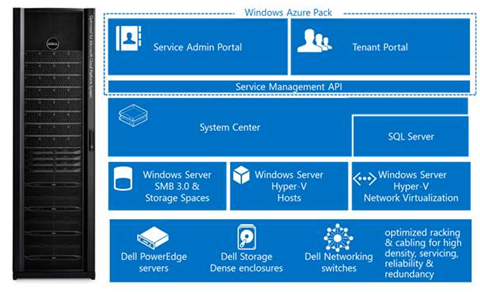 Teams with Dell for hybrid solution.

Microsoft and Dell have partnered to create a 'cloud in a box' offering for Microsoft's Azure product, targeting businesses that want to run cloud-like solutions out of their own data centres.

The new product, officially called the "Microsoft Cloud Platform System" (CPS), was officially unveiled today at a US event.

The company claims the product combines the "efficiency and agility of cloud computing" alongside the control and customisation customers can access in their own virtualised environments.

It is aimed at customers hesitant to move their environments to the public cloud, for reasons ranging from legacy infrastructure to sensitive information.

Microsoft also hopes CPS will make it stand out against competitors Amazon Web Services and Google, neither of which currently offer a similar product.

"We were struck by the large number of customers who were failing to realise the benefits of the cloud," Microsoft's CPS engineering team wrote in a blog post.

" ... too many customers were failing because of the challenges of complex system definition, hardware integration and software deployment and configuration. In short, too many cloud computing projects could not fulfil the anticipated promise due to cost and complexity."

The solution will be available from next month in the US. The company did not comment on Australian availability, and pricing was not announced.

Microsoft's CPS scales from one to four racks, which can support 2000 to 8000 virtual machines respectively. Each rack contains 512 cores across 32 servers, 8TB of RAM (256 GB per server), and 282 TB of usable storage.

CPS comes pre-assembled with an Azure self-service portal, integrated anti-virus, disaster recovery, monitoring, and orchestarted patching, among other features. Microsoft claims users will not need to buy any additional components to create a complete solution.

A core element of the solution's design was a focus on failure mode analysis, the CPS engineering team wrote in the post.

Redundancy in the physical infrastructure and "intelligence in the software" was built in to ensure that when failures occur, business-critical services are not impacted, the company claimed.

"Designing a resilient system requires a careful balance between availability and the cost of service delivery," the team wrote.

"Working closely with Dell, we took decisions that allowed us to strike a careful balance between the cost of the infrastructure, and productivity of the system. This “sweet spot” was achieved by leveraging proven hardware components together with Microsoft’s software-defined data centre technologies."

Microsoft is also offering a "unified support model" for CPS, providing users a dedicated point of contact for issues.

The company also today announced it would make its Azure cloud service available in two Australian data centres from next week.

HP's 'Helion' brand offers a set of services for deploying OpenStack on HP servers or on third party cloud services, while the company's acquisition of Eucalyptus attempts to to do the same for those organisations intending to build hybrid clouds that are compatible with AWS.