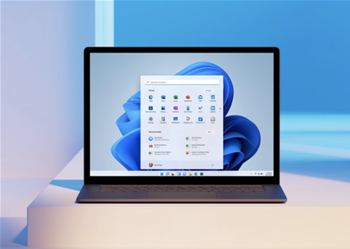 Progressive rollout to extend into mid-2022.

Microsoft will start offering its Windows 11 operating system from October 5, but says that upgrades will be available via "a phased and measured approach” stretching into “mid-2022.”

The company unveiled Windows 11 back in late June - its first major operating system revamp since 2015 - saying at the time that the new OS would hit the market by the end of 2021.

In a blog post overnight, Microsoft said that “Windows 11 will start to become available on October 5, 2021.

“On this day, the free upgrade to Windows 11 will begin rolling out to eligible Windows 10 PCs and PCs that come pre-loaded with Windows 11 will start to become available for purchase,” it said.

“The free upgrade to Windows 11 starts on October 5 and will be phased and measured with a focus on quality.

“We expect all eligible devices to be offered the free upgrade to Windows 11 by mid-2022.

“If you have a Windows 10 PC that’s eligible for the upgrade, Windows Update will let you know when it’s available.”

Microsoft said that “ new eligible devices will be offered the upgrade first.”

“The upgrade will then roll out over time to in-market devices based on intelligence models that consider hardware eligibility, reliability metrics, age of device and other factors that impact the upgrade experience,” it said.

The vendor said it would relaunch its PC Health Check app soon, “so you can check to see if your current PC will be eligible to upgrade.”

Microsoft said that for customers whose computers “won’t upgrade” and “who aren’t ready to transition to a new device … we will support Windows 10 through October 14, 2025 and we recently announced that the next feature update to Windows 10 is coming later this year.”

Business users of Windows “can ... test Windows 11 in preview today in Azure Virtual Desktop, or at general availability by experiencing Windows 11 in the new Windows 365,” the company added.