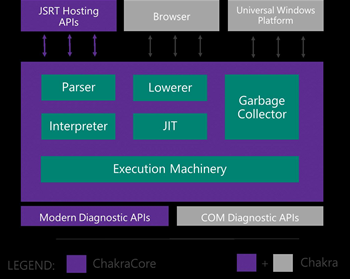 Javascript VM in Edge browser becomes free for everyone to use.

Microsoft intends to release the self-contained parts of its Chakra Javascript engine, used in the Edge web browser that debuted in Windows 10, as open source in January next year.

The Javascript engine will be released as ChakraCore. It will be a fully self-contained virtual machine that can be embedded in applications such as NoSQL databases, productivity software, and games that require scriptability, Microsoft's principal progrram managers Gaurav Seth and Adalberto Foresti announced over the weekend.

ChakraCore will not need any parts of the Edge web browser to parse, interpret, compile and execute Javascript code, the two said.

The Javascript engine will have a new set of diagnostic application programming interfaces rather than the Windows-specific common object model (COM) APIs currently used for Chakra, and Microsoft intends to make the new diagnostic APIs in ChakraCore available in Chakra on Windows 10 as well at a later stage.

Seth and Foresti said Chakra is used elsewhere than Edge in services such as Azure DocumentDB, the Cortana personal digital assistant and the Outlook.com email site. The event-driven server-side Node.js Javascript stack that is built on Google's V8 engine also works with Chakra.

Microsoft claims that Chakra in Edge supports up to 90 percent of the features specified in the ECMAscript 2015 standard and is written to take advantage of hardware optimisation features for improved performance on disparate platforms, with the ability to throttle back to reduce resource and power consumption on mobile devices.

The company has yet to specify which type of open source license it will release ChakraCore under, but it has used the liberal Apache 2.0 in the past.